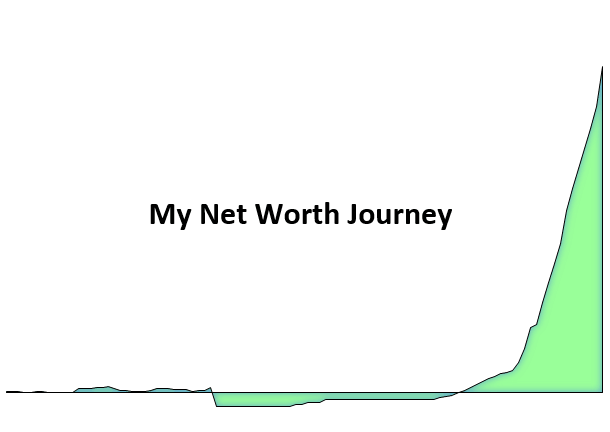 I have noticed a recent trend of financial bloggers sharing personal net worth journeys using one chart.

I decided to hop on the bandwagon.

Here’s a look at my net worth journey over the last 24 years: 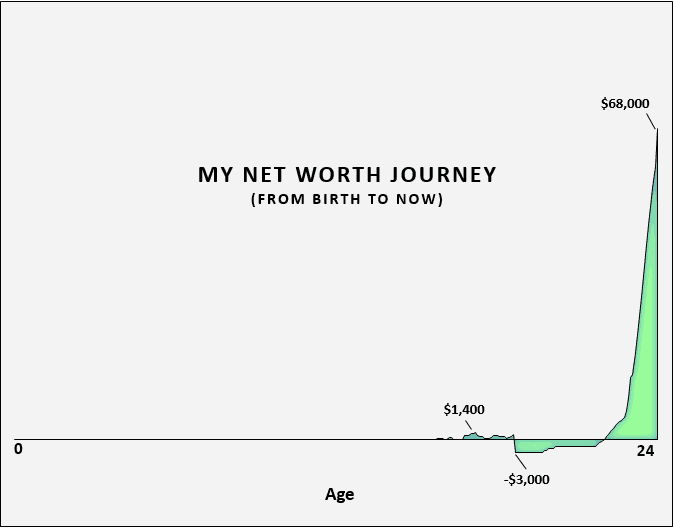 Now for a bit of explanation…

My net worth for my first 16 years on earth was a whopping zero dollars. I knew absolutely nothing about money and I could not have told you what “net worth” even meant at age 16. 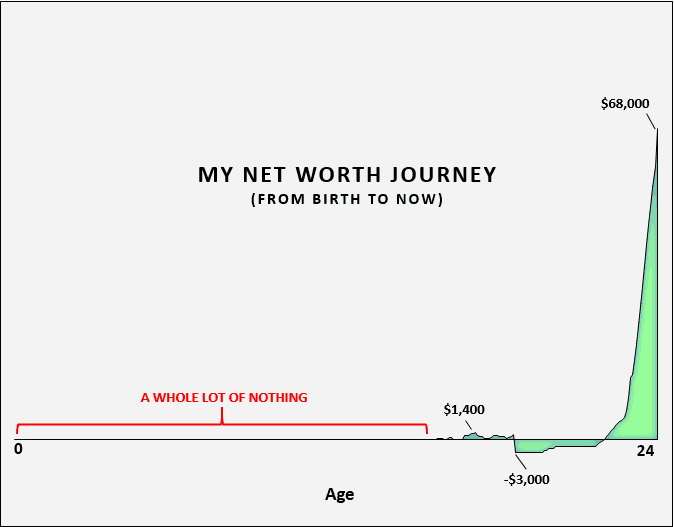 Do I wish I had known the importance of money during my childhood?

I had a fantastic childhood. I grew up in a middle class family. My dad worked at the post office and my mom stayed home with my me, my twin sister, and my older brother. We never had a lot of money, but it was never a concern either.

I don’t regret being ignorant about money as a kid. I was too busy playing video games, hanging out with friends, and enjoying myself.

When I turned 16 I became a soccer referee. This was my first time earning any type of income and it was actually an incredible gig to have as a teenager. 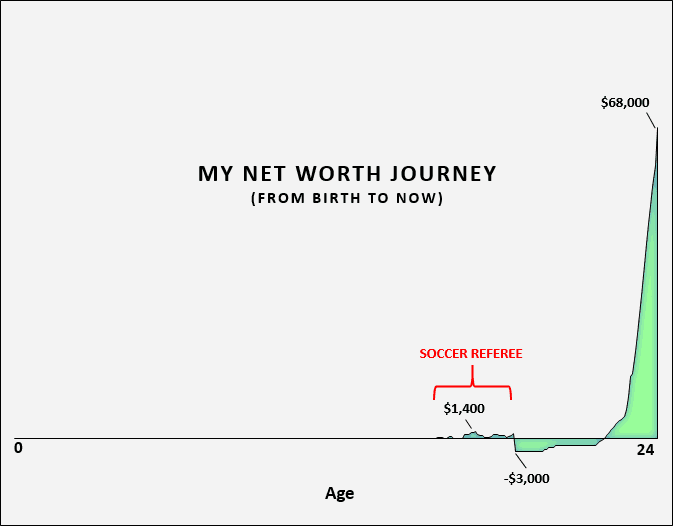 I would typically get paid between $18 – $24 per hour just for being a sideline referee. When I was the head referee in the center of the field, I would make closer to $24 – $30 each game.

Side Note: If you enjoy soccer at all, becoming a referee can be a pretty phenomenal side hustle. I met plenty of fellow referees who would work all day Saturday and Sunday at weekend tournaments and bring home $400 – $500 in a single weekend. That beats working at a retail job earning minimum wage any day.

Even though most of my earnings went towards buying video games and Chipotle burritos, I did manage to save close to $1,400 at the peak of my early net worth days.

When I started college, my positive net worth took a nosedive into the negatives, as I took on student loans. 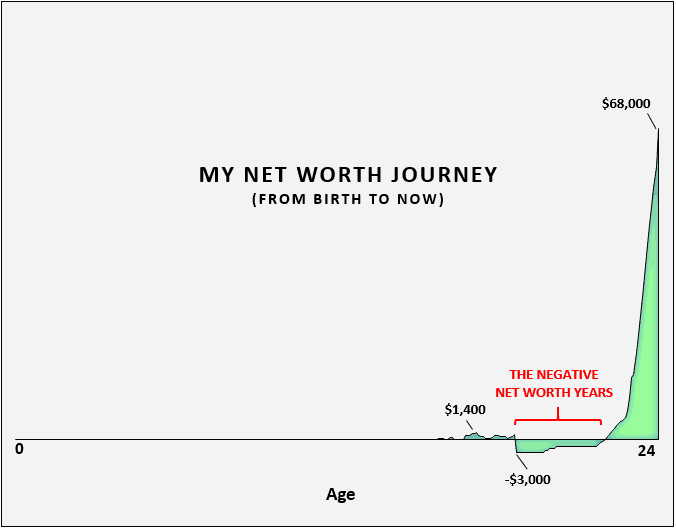 Fortunately, I made the decision to commute to a college near my hometown and only had to take on $3,000 of student loans. I paid for the rest of my tuition through a combination of referee gigs, retail jobs, and scholarships.

I started to save the small amount of income I was earning and began paying off my student loans while I was still a student. Slowly I worked my way up to a positive net worth by age 22.

Age 22 to Now: A Financial Rocket Ship to the Moon

I turned 22 as I was starting my senior year of college. This was when I landed my first real internship as a data analyst at an insurance company and started earning $15 per hour. By living at home I saved virtually every dime I made. This was the starting fuel for my financial rocket ship. 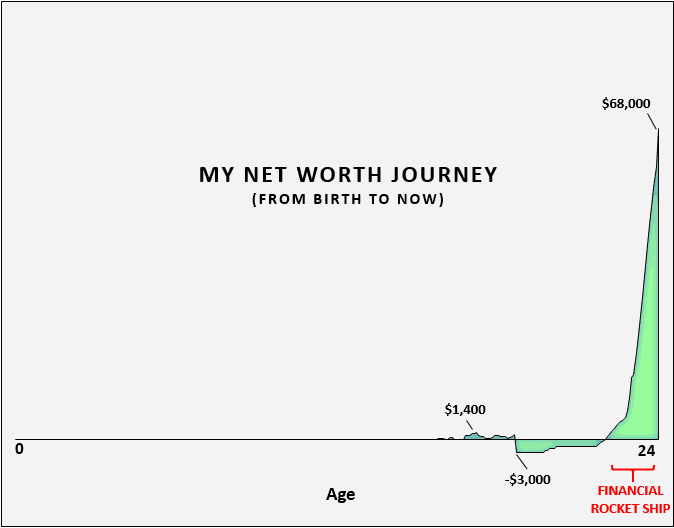 Fortunately this is when the rocket ship really took off. I started working full-time at my insurance company, earning a respectable starting salary of $52,000. I continued living at home as I pursued a Master’s degree at the same college.

This is when I started saving thousands of dollars each month and piece by piece began to lay the foundation of my financial future.

Let’s zoom in on this two year time period: 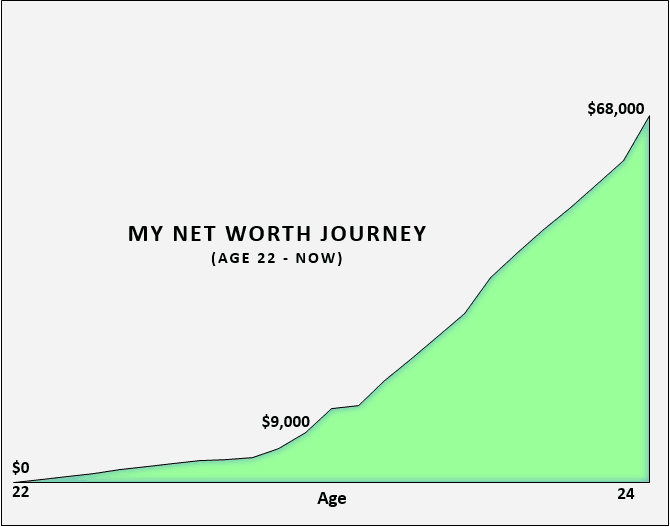 My net worth was ramping up nicely as I continued to save, picked up stats tutoring gigs, and kept living at home.

Once I graduated, I had a net worth around $30,000. It was at this point that I learned my next promotion at the insurance company was well over a year away, and I made the decision to pursue a higher-paying job elsewhere.

This past summer I landed my current job as a data scientist and bumped my salary up to $80k. I also started earning some decent dividend income from stocks and REIT’s. My blogging income has steadily risen over the past few months as well.

These three income streams have sent my net worth higher at a faster pace than ever before. 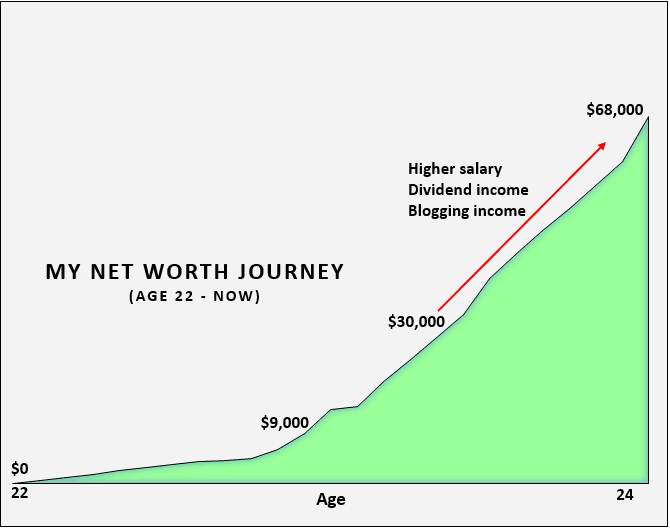 These past two years have been a wild net worth journey for me and I hope the next few years prove to be just as exciting.