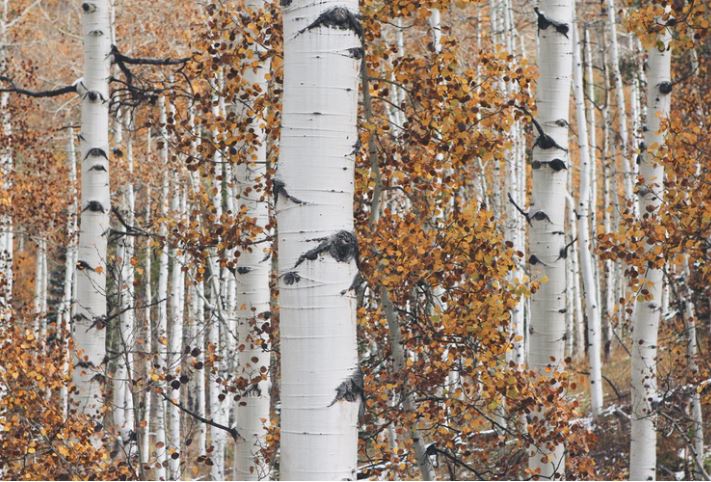 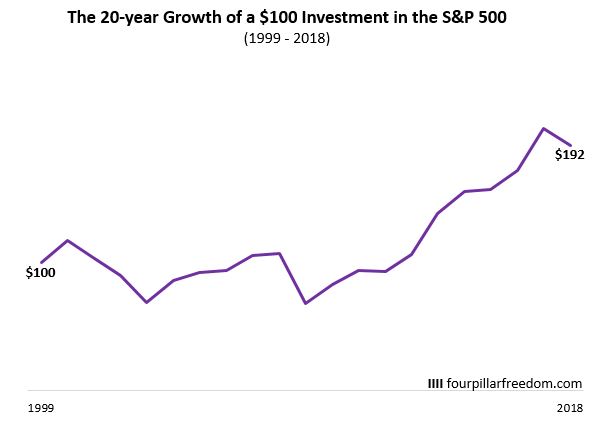 Note: This accounts for inflation and also assumes dividends were reinvested each year.

Although your investment nearly doubled over the course of 20 years, it took a volatile journey, spending nearly half of the time at a value less than $100.

How to Handle Stock Market Volatility

This is the nature of investing in the stock market: over the long haul, prices tend to creep higher and higher, but the journey to higher prices is rarely smooth.

This inherent volatility is what makes stock market investing difficult for people who check their investments frequently. The ups and downs of the market cause most people to act irrational with their investments and buy and sell at exactly the wrong times.

Rather than checking your account balances obsessively, a better approach for most investors is to simply ignore short-term price fluctuations and let your investments sit untouched.

If the market experiences a positive month, just sit and chill.

If the market experiences a negative month, just sit and chill.

Why? Because the whole point of investing money now is to have more money later. So, it shouldn’t matter how your investments perform over the short-term since you’re more concerned with how they perform over the long-term.

And it turns out that you can improve your returns in most cases by simply not touching your investments for many, many years. 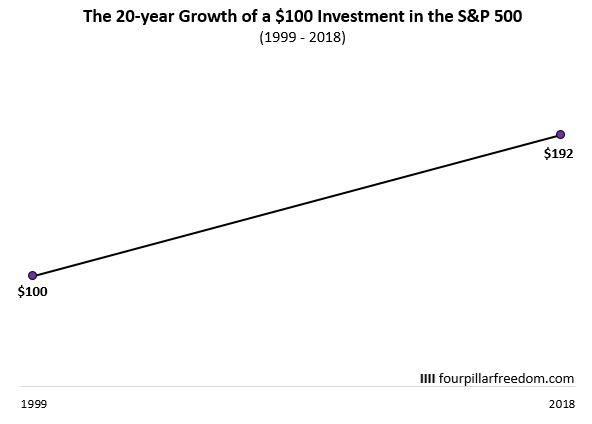 The compound annual growth rate calculator tells us that this initial $100 investment grew at 3.3% annually – not a stellar annual return, but the actual ending dollar amount is substantial since it had 20 years to compound.

Most investors would happily watch an investment nearly double in value over a 20-year time period, but not all investors would be able to stomach the drawdowns that come along the way.

The following chart shows how much a $100 investment was worth at the end of each 20-year period. Each line in the chart represents a unique 20-year period.

Note: Again, I assume all dividends are reinvested annually and the ending amount is adjusted for inflation. 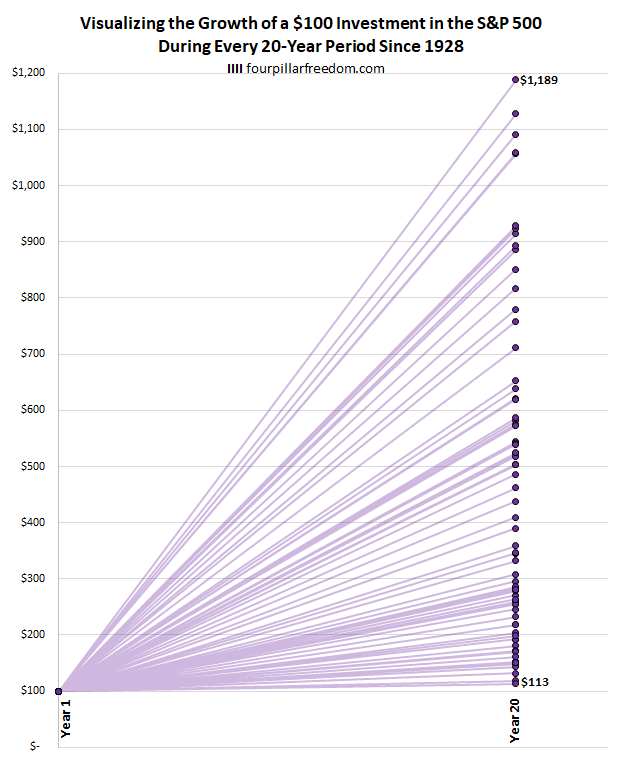 Although the returns varied significantly, the S&P 500 never lost money during any 20-year period, even after accounting for inflation. This means that anyone who invested $100 and simply let their investment sit for 20 years would have earned  a positive return.

We can create this same chart for all 30-year investment periods since 1928: 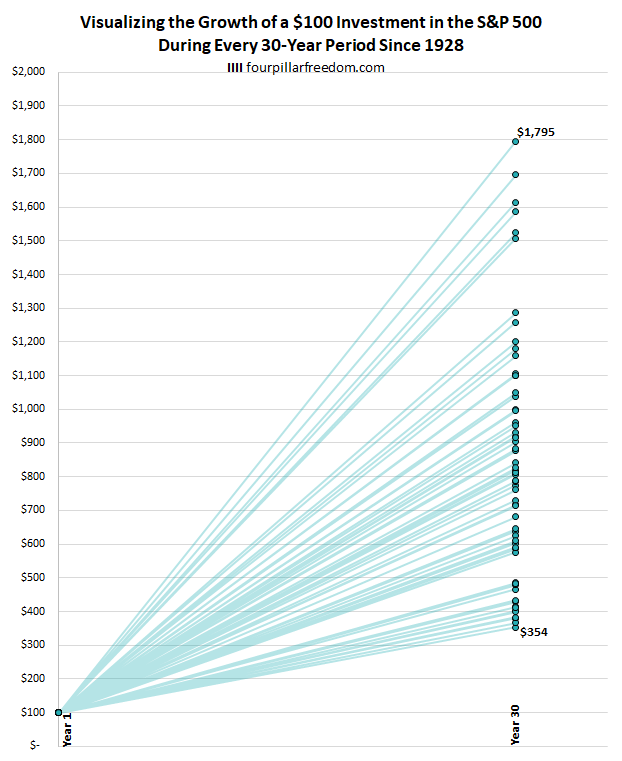 Once again, returns varied significantly from one 30-year period to the next, but even during the worst 30-year period, an initial investment of $100 still more than tripled in value.

The investor who simply let their $100 sit in the market for three decades was significantly rewarded.

Lastly, we can create this same chart for all 40-year investment periods since 1928: 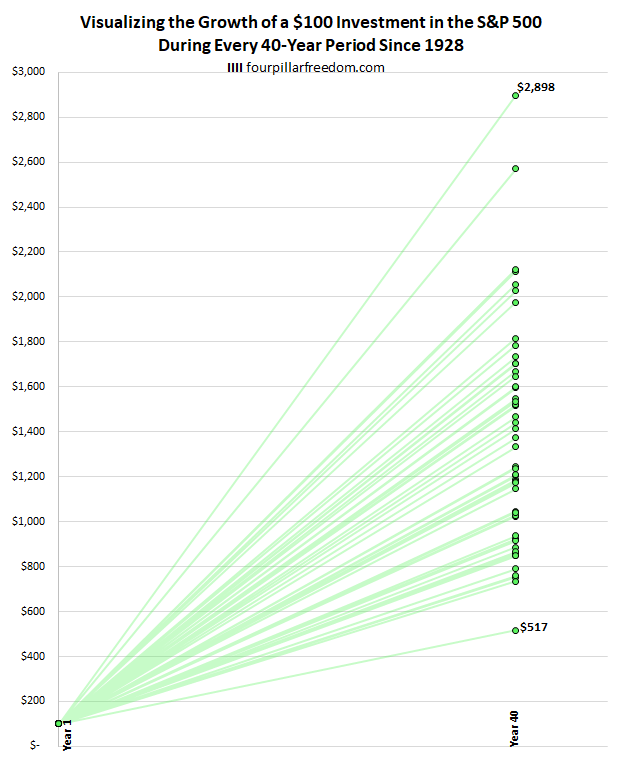 The stock market can be volatile, but over the long haul it has proven to be a money-making machine for any time period of 20 years or more.

This is why one of the best ways to improve your investment returns is to simply not touch your investments for several decades. More than likely your investments will drop in value at some point, but given a long enough time horizon it’s highly unlikely that you’ll lose money.

The stock market can produce serious wealth, but only if you give it enough time to work with and if you resist the urge to buy and sell in an attempt to time the ups and downs.