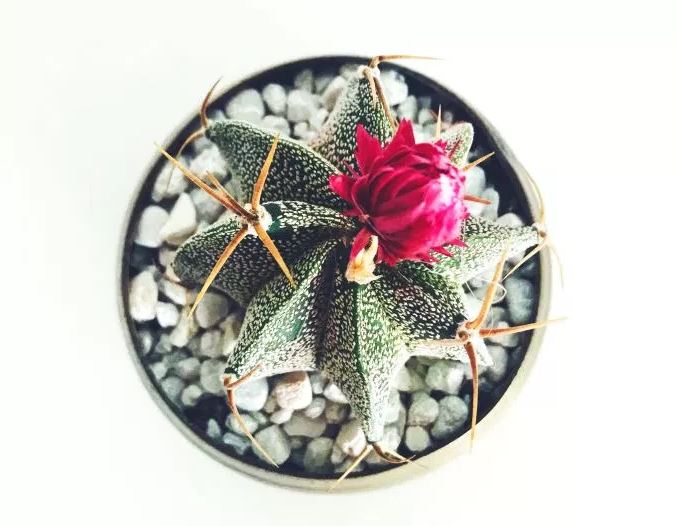 In my early years of college, I invested $3,000 into three individual stocks. Each day I would check the prices of each stock, sometimes several times per day.

On up days, I was thrilled. On down days, disappointed.

At the time, I thought I was being a prudent investor by keeping a close eye on my tiny investment portfolio. What I failed to realize was that I didn’t have nearly enough money invested for any gains to make a material difference in my financial life.

For example, suppose my collection of stocks increased in price by 7% over the course of the year. That would be a gain of $210. If I sold each individual stock, I’d have to pay a $7 trading fee. My total gain would be a measly $189.

(I wouldn’t have had to pay the long-term capital gains tax since my yearly income at the time was less than $37,950)

In the grand scheme of things, $189 is peanuts. I would have been better off finding a $20 cheaper monthly phone plan to save $240 over the course of a year. 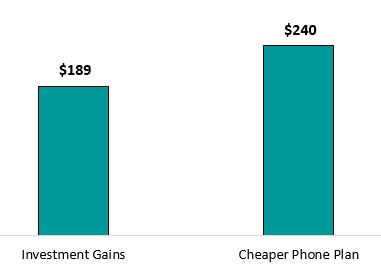 During these years, I made the mistake of focusing on percentages, instead of absolute dollars. I thought about how cool it would be to earn a 7% return on my investments, without realizing that the actual dollar return was insignificant.

Let’s run some numbers on the S&P 500 annual returns since 1950 to find out just how important absolute returns are compared to percentage returns. 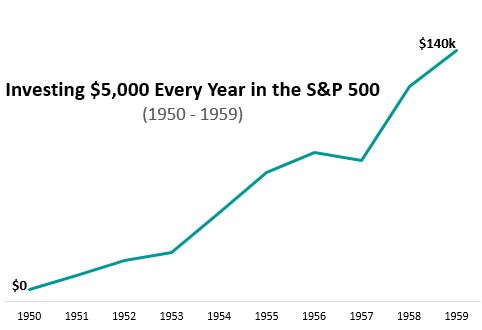 Now consider an investor who got dealt the worst 10-year investment hand ever from 1999 to 2008. To obtain the same $140k as the previous investor, they would have needed to invest $17,000 each year: 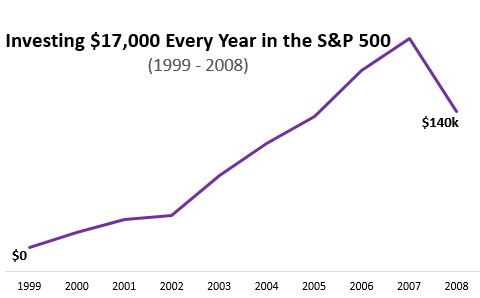 These two investors would have accumulated the exact same amount of money after a decade of investing: 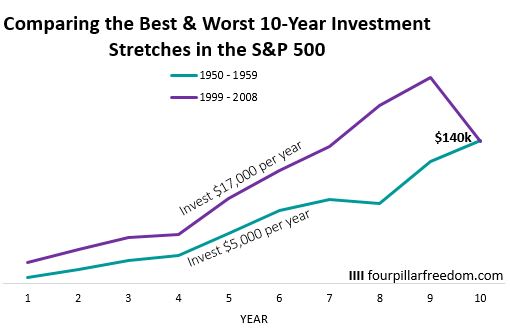 We can perform this same thought experiment with 20-year investment periods. 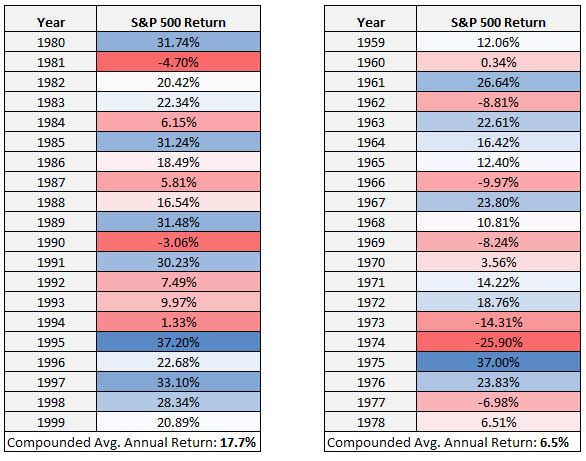 It turns out that someone who invested during the worst 20-year period would have needed to invest about $23,900 each year to also obtain $888,000: 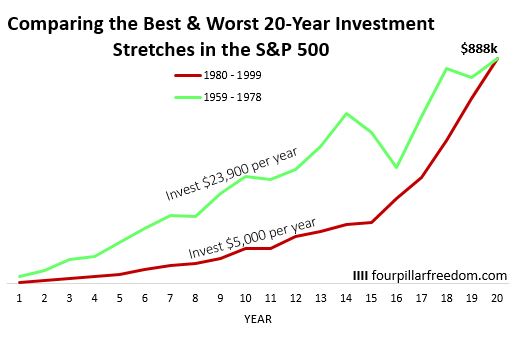 When I used to work in Corporate America, I had a coworker who was highly interested in investing. He and I had a friendly competition where we would compare the investment performance of our funds within our 401(k) plans to see who earned the highest returns.

At the end of my first year working there, he revealed that he had earned 8% total returns while I had only earned 6% total returns. At first I felt jealous, but the feeling subsided when he told me that he only had the ability to invest $50 each month over the prior year because he had so many other bills to pay like housing renovations, childcare costs, and student loans.

At the time, I was fortunate enough to have very few bills so I had been investing around $1,000 each month into my 401(k). It goes without saying, but I clearly had a much higher balance in my 401(k) than my coworker, despite earning lower investment returns.

I’ve noticed a trend that many beginner investors often obsess over investment performance and asset allocation early on in their financial journey. For example, they’ll attempt to create a portfolio of individual stocks that they believe will outperform the market or they’ll try to research complex investment strategies that attempt to time the market, all in the hope that they’ll be able to increase their returns by a couple percentage points.

What most beginners fail to realize, and what I also failed to realize early on, is that when you’re just starting out it’s unlikely that you have enough money to invest for returns to make much of a difference. As I mentioned earlier, a 7% gain on my $3,000 stock portfolio in college would have been worth less than $200,

It’s wonderful to develop a habit of investing $100 per month when you’re young, but if you believe that investment returns are going to make you rich anytime soon, you’re only fooling yourself.

I often refer to the following chart to illustrate this idea:

Investment returns make a difference in the later years, but not so much in the early years.

Focus on Income Early On

I often receive emails from college students and recent grads asking for investment advice. My response is always the same:

2. Automate your investments from each paycheck.

3. Then, use the rest of your time and energy to grow your income. The amount of money you earn will make a much bigger difference in your finances early on compared to investment returns.