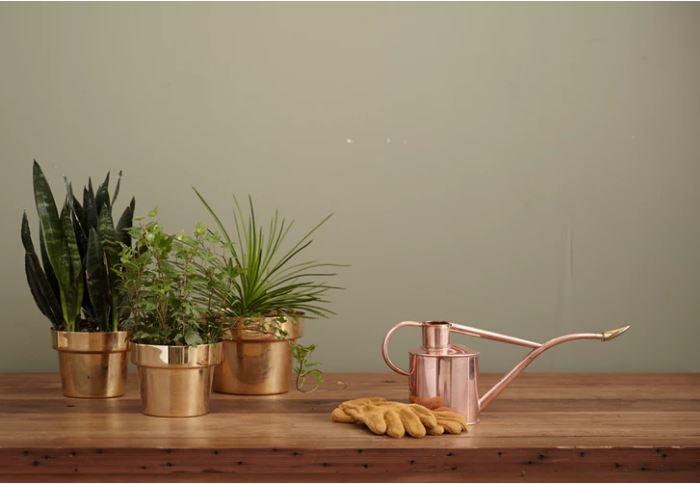 Here’s a fun thought experiment: Can the previous decade of stock market returns predict the upcoming decade of returns?

For example, if we know the stock market performed lousy during the previous ten years, can we expect it to perform much better over the coming 10 years to make up for the lackluster returns in prior years?

Likewise, if the market crushed it during the previous ten years, is it more likely to perform poorly over the coming 10 years?

To answer these questions, I downloaded the inflation-adjusted S&P 500 annual returns dating back to 1928 and crunched the numbers.

Here’s a look at the S&P 500 inflation-adjusted returns for each year since 1928: 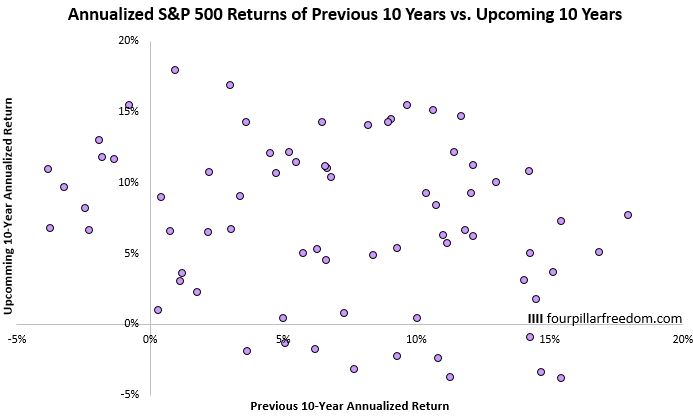 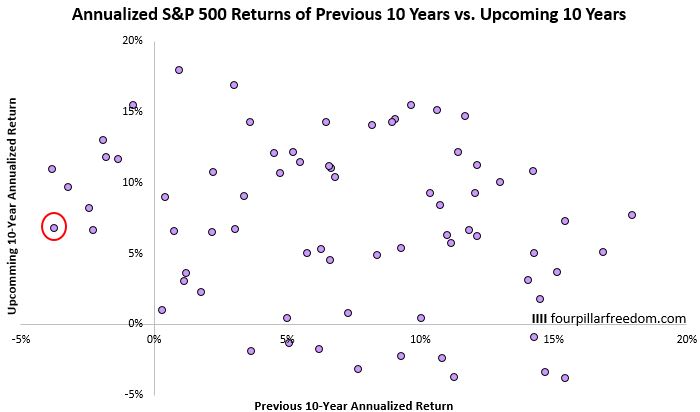 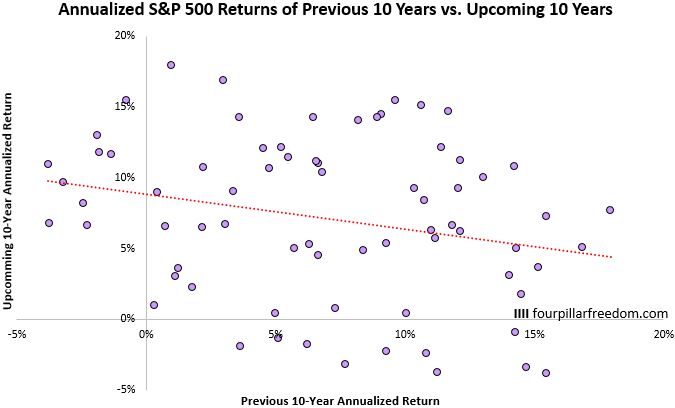 Negative Previous 10-Year Returns: A Good Sign for the Future 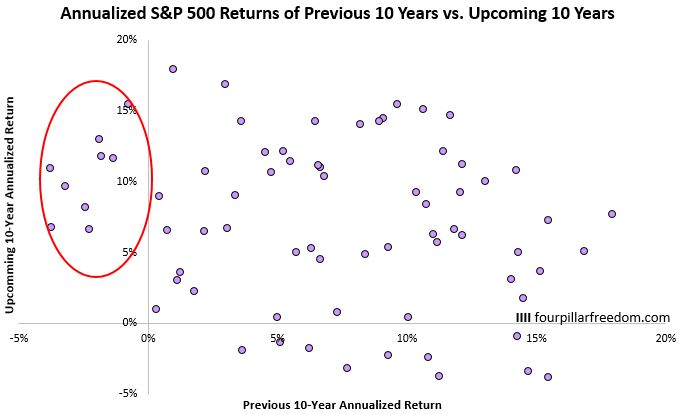 Specifically, the average upcoming 10-year annualized returns for these periods was 10.5%.

This isn’t terribly surprising. Since the stock market generally increases over time, it’s pretty likely that the market will perform well following a decade of negative returns to get back to its long-term average.

So, when the market delivers negative returns during the previous 10 years, we can be pretty confident that it will deliver positive returns in the following 10 years.

However, when the market delivers positive returns during the previous 10 years, it’s a bit harder to predict how it will perform over the following 10 years. For example, consider the scatterplot with all of the negative previous 10-year returns removed: 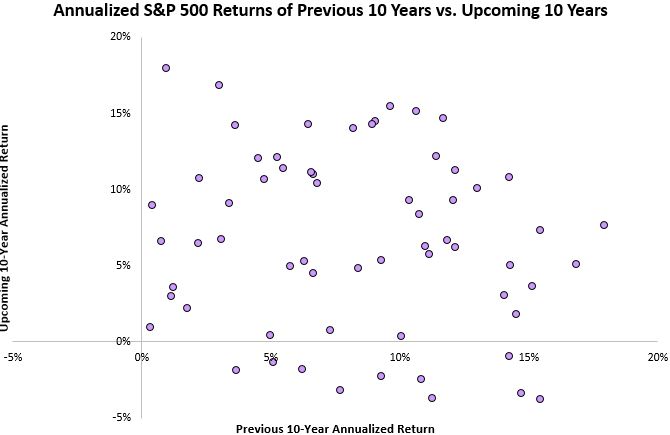 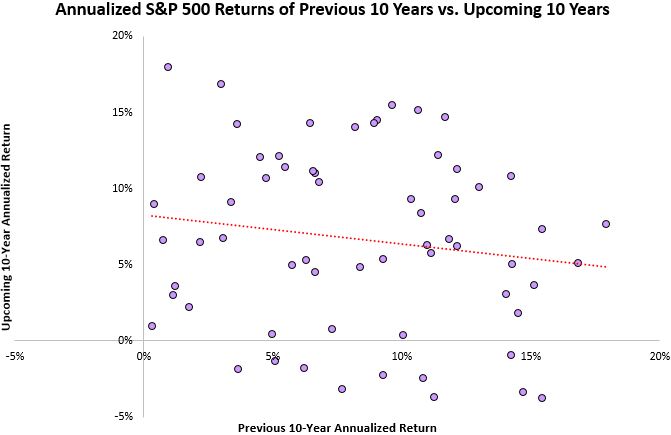 The upcoming 10-year returns are also wildly spread out. 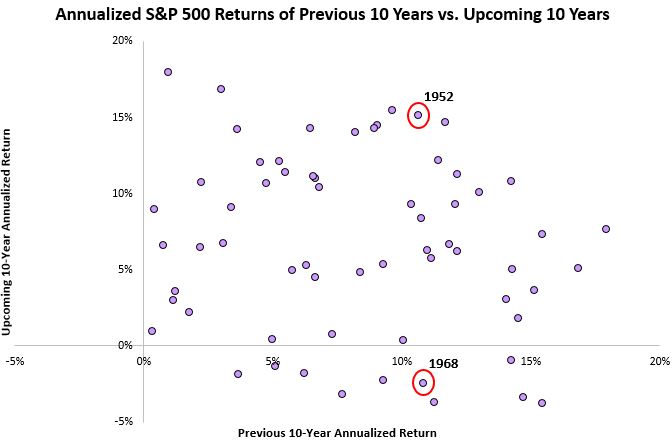 What Type of Returns Can We Expect in the Next 10 Years?

From this analysis we’ve seen that there is only a weak relationship between previous 10-year returns and future 10-year returns. So, attempting to predict how the S&P 500 will perform over the next 10 years from 2019 through 2028 is quite difficult. 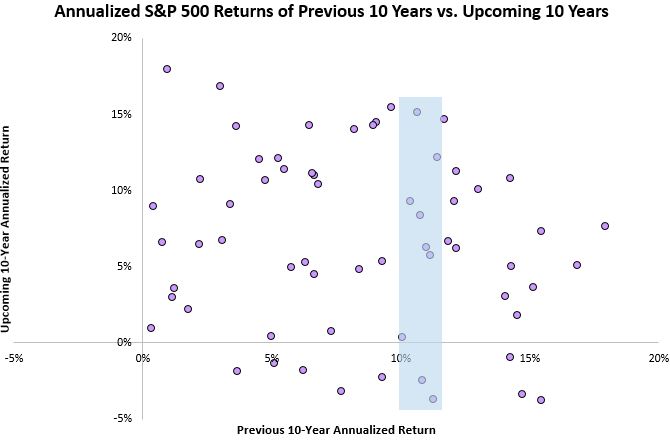 This analysis revealed the following:

Note: All charts used in this post were created in Excel. To find out how to create similar charts yourself, grab a copy of the Excel Genius Toolkit.