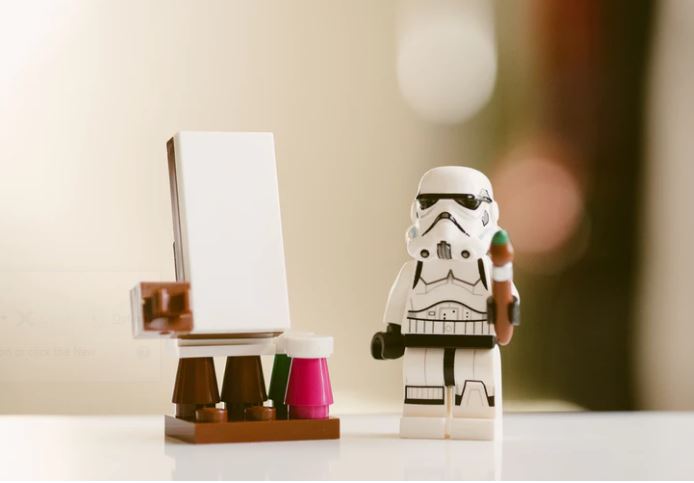 It seems that the rising cost of college is mentioned in the news and in media outlets constantly. However, according to a recent report from Child Aware of America, there’s one common expense that is often just as expensive, if not more expensive than college, that flies under the radar: childcare.

The most shocking finding from the report is that average childcare costs are higher than average public college tuition and fees in 28 U.S. states.

The table below shows the average annual cost of full-time center-based childcare for an infant along with the average public college tuition and fees for every U.S. state:

Note: Data was unavailable for Montana and South Dakota 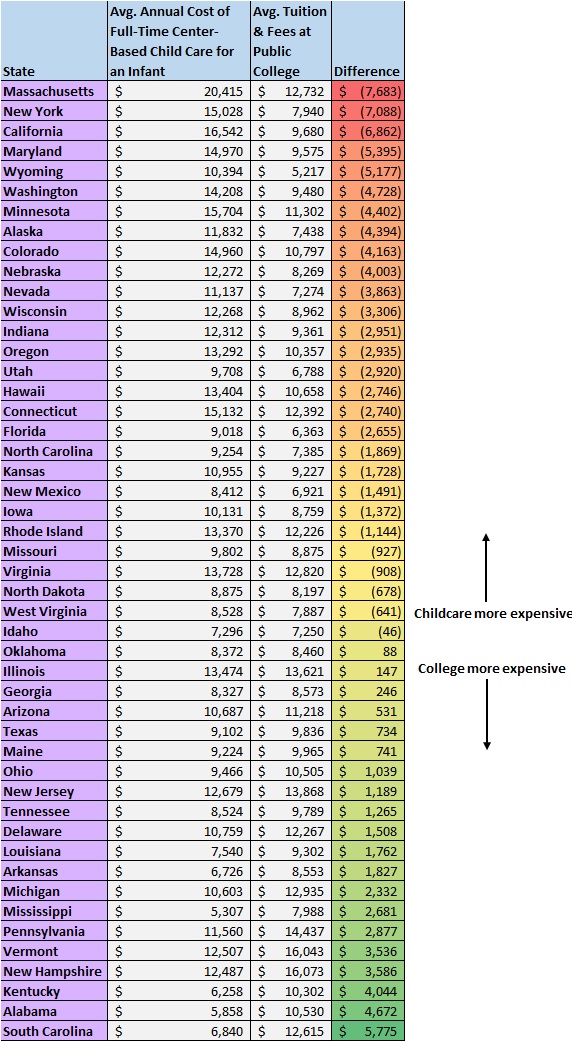 On the flip side, South Carolina has the most favorable difference with college costs exceeding childcare costs by $5,775 annually.

Here’s a visual look at childcare vs. college costs for each state:

Intuitively these numbers make sense. The states with lower average childcare costs tend to be lower on both the income and the cost of living scale as well. For example, consider this map I created that shows median household income by state: 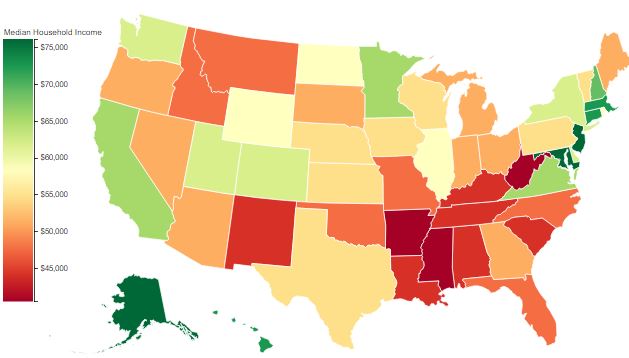 This begs the question, how expensive is childcare relative to the median household income in each state? Fortunately, the report from Child Aware of America provides these numbers. The table below shows the average annual childcare costs along with the median income for single-parent families and married-couple families by state: 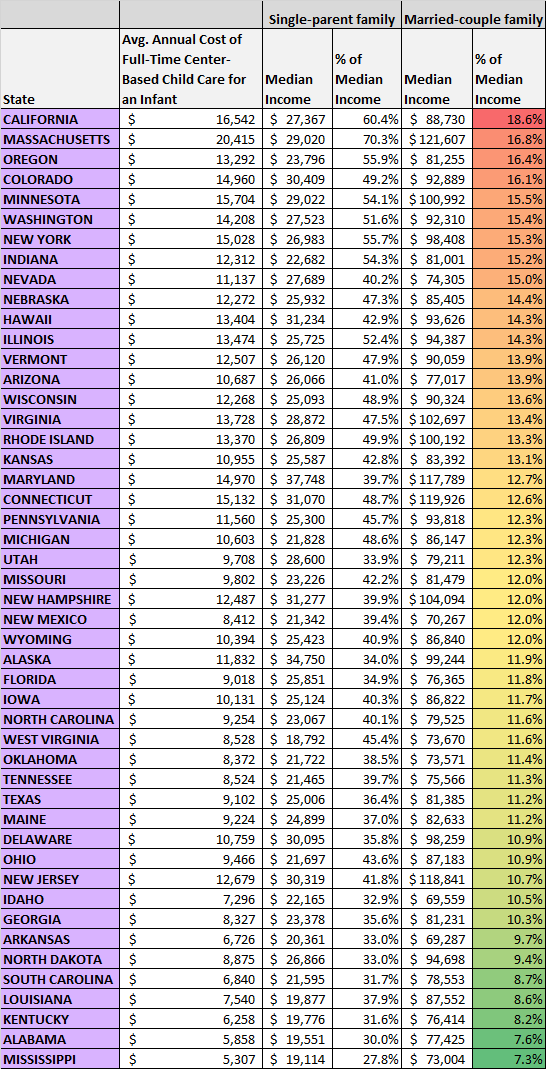 The Effect of High Childcare Costs

Rising childcare costs are having a real impact on family dynamics. According to a recent New York Times survey, the number one reason people said they expect to have fewer children than they considered ideal is because childcare is too expensive.

This brings up an interesting question: for couples, does it make sense for one partner to be a stay-at-home parent to avoid paying for childcare?

Obviously this is more than just a financial decision, but as a personal finance blogger I like to look at these questions from a financial perspective.

On one hand, if one partner earns a fairly low income, it might not make sense for them to remain employed if the annual cost of childcare eats up a huge percentage of their income.

On the other hand, if that partner does decide to be a stay-at-home parent for a few years and then enters the workforce again once the child enters the school system, this time away from work can have a massive impact on that partner’s lifetime earnings.

To see the true impact of taking time away from work, the Center for American Progress built a fascinating calculator that shows the potential income loss over the course of a career for someone who decides to take time away from work to be a stay-at-home parent.

According to the calculator, for a woman who is age 26, started working at age 22, currently earns $44,000 per year, and plans to be out of the labor force for five years, she would potentially lose out on $684,381 in income assuming she doesn’t retire until age 65: 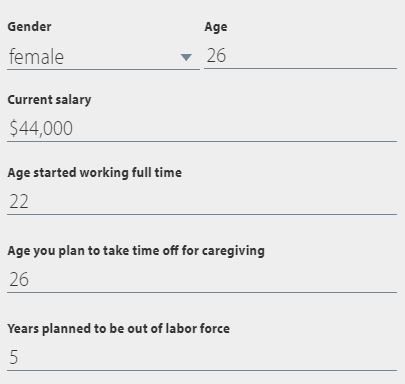 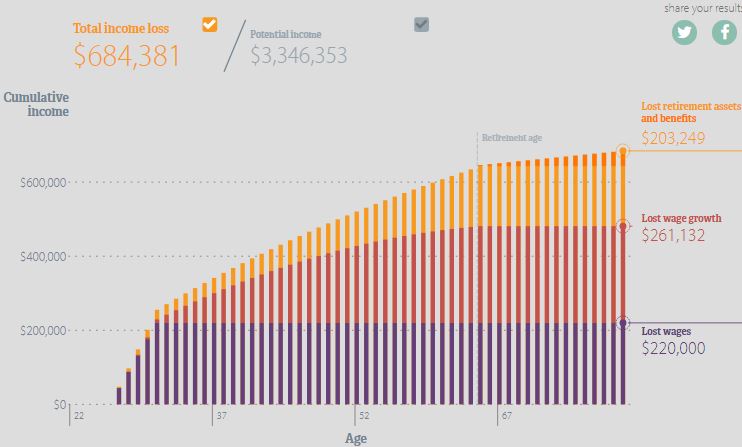 Keep in mind that this calculator is only making estimates based on national averages. It’s entirely possible that someone could re-enter the workforce after being a stay-at-home parent and increase their income much more rapidly than this calculator estimates.

Also, this calculator assumes that the stay-at-home parent would earn zero dollars in income each year. Thanks to the internet, though, there are many ways to earn income online now, so it’s possible that a stay-at-home parent could earn a decent chunk of income without holding down a traditional office job.

Also, this calculator assumes that you won’t retire until age 65. If the same woman in the example above instead retired at age 40, she would only lose out on $381,000. That’s still a significant amount but not nearly as much as $684,381.

Before reading this report, I didn’t realize just how expensive childcare has become. As someone who is not yet a parent, this is an expense that I haven’t had to consider but it’s one that I’ll keep in mind when the time comes.

To those who are parents out there: Have you found a cost-effective solution for childcare? I’d love to hear your thoughts in the comments below.

6 Replies to “Childcare is More Expensive Than College in 28 U.S. States”