When I worked in Corporate America, I used to dread going back to work on the Monday morning following the long Thanksgiving weekend.

After spending several days stuffing my face with comfort food, watching football, and hanging out with family, I had to wake up at 7AM on Monday, get ready for work, commute in traffic, and spend the next eight hours in a cubicle. Talk about a sad end to an enjoyable weekend.

But this year was different. Since I quit my day job as a data scientist five months ago, I didn’t have any Monday to dread following the holiday weekend. Yet, I still woke up at 7AM, made the commute to the local coffee shop, and spent time working.

Since quitting my day job, something important has changed: my attitude towards my work. I love what I do now along with the environment I get to do it in. There’s nothing better than being able to work on my collection of websites in a coffee shop setting every morning. It’s complete bliss for me.

From an outside perspective it may seem that quitting my day job changed nothing – I still follow a similar Monday morning routine. However, I’ve experienced a massive change internally. I’m much happier on a daily basis.

This reminds me of an old zen quote:

The equivalent in my personal situation could be:

A young boy became a monk. He dreamed of enlightenment and of learning great things. When he got to the monastery he was told that each morning he had to chop wood for the monks fires and then carry water up to the monastery for ablutions and the kitchen. He attended prayers and meditation, but the teaching he was given was rather sparse.

One day he was told to take some tea to the Abbot in his chambers. He did so and the Abbot saw he looked sad and asked him why.

He replied every day all I do is chop wood and carry water. I want to learn. I want to understand things. I want to be great one day, like you.

The Abbot gestured to the scrolls on shelves lining the walls. He said,

“When I started I was like you. Every day I would chop wood and carry water. Like you I understood that someone had to do these things, but like you I wanted to move forward. Eventually I did. I read all of the scrolls, I met with Kings and and gave council. I became the Abbot. Now, I understand that the key to everything is that everything is ‘chopping wood and carrying water’ and that if one does everything mindfully then it is all the same.”

The underlying message of the story can be interpreted in many ways, but I interpret it as:

Many of us think that once we achieve some future state – enlightenment, financial independence, the top of the mountain, etc. – we will finally be content. But the truth is that none of these destinations will bring lasting contentment.

Instead, we must realize that contentment can only be found in being fully present with ordinary daily activities – with chopping wood and carrying water. When you’re able to find fulfillment in these ordinary activities, you can finally be at peace in life.

This simple idea – that “getting somewhere” or “achieving some milestone” won’t bring lasting fulfillment – is something I’ve seen shared by many people. Here are a few examples:

Actor Jim Carrey once said, “I wish everyone could get rich and famous and everything they ever dreamed of so they can see that’s not the answer.”

FIRECracker, one half of the duo over at Millennial Revolution who retired early at 31, recently wrote an article that outlined the following things early retirement did not change about her life:

Anxiety over things you care about: “When you care about something, you’ll still get anxious. If you spend 2 years working on your book baby, once you release it into the world and open it up to criticism, it’ll still feel terrifying. I didn’t do it for the money, but that doesn’t mean I don’t care whether it makes an impact.”

Purpose: “Once you’re FI, you no longer have to run this [rat] race, and that’s pretty terrifying because now you have to find your real purpose. FIRE won’t automatically give you that. You have to find it yourself.”

Dave over at Accidental FIRE created the following graphic that perfectly encapsulates the experience most people have once they achieve financial independence:

Achieving financial independence provides a brief spike in happiness, but eventually you return to your baseline level of happiness and you still have to find ways to fill your days with meaningful activities.

Alex Ikonn, a fairly well-known YouTuber, once shared in a video that he was able to create a mostly passive online business that gave him and his girlfriend complete freedom over their time, and yet they found that they weren’t happy with a lifestyle that involved sitting around all day with nothing to work on.

In an article titled I Built a 4-Hour Workweek…What Do I Do Now? Nat Eliason shared that he was able to build a mostly passive online business that enabled him to become financially independent:

“My income, at this point, is almost completely automated, only spending 2 hours or less a week on work related to how I make money.”

After he spent some time traveling, though, he realized that achieving financial independence didn’t bring him lasting happiness. Instead, he found himself to be a bit bored, which lead him to the realization that the point of passive income wasn’t to quit working, but rather to have the ability to do meaningful work:

“But, what I recognize now is that the goal of setting up a lifestyle like this shouldn’t be to opt out of work and life and chill on a beach, but rather, to free up enough time and resources to figure out what you really want to dedicate yourself to.”

In the book How to Get Rich, Felix Dennis shared his personal tale of how he became one of the wealthiest men in England. Near the end of the book, he shares:

“I have been very poor and I am now very rich. I am an optimist by nature. And I have the ability to write poetry and create the forest I am busy planting. Am I happy? No. Or, at least, only occasionally, when I am walking in the woods alone, or deeply ensconced in composing a difficult piece of verse, or sitting quietly with old friends over a bottle of wine. Or feeding a stray cat…I could do all those things without wealth.”

This man who had spent his whole life building his net worth admitted openly that he was not happy and that he could do all the things that brought him happiness without his wealth.

“The fundamental delusion – there is something out there that will make me happy and fulfilled forever.” -Naval Ravikant

In each of the examples above, each individual obtained something significant – fame, achievement, success, wealth – but found that obtaining these things didn’t bring lasting happiness.

Part of the reason for this is because a destination only represents a brief moment in time. It feels good to reach it, but the joy and elation it brings can fade much quicker than we’d expect.

It’s similar to lifestyle inflation – obtaining the new car, new house, and new phone feels good for a little bit, but these things quickly become normal and we move on in search of even newer, better things.

In A Guide to the Good Life, William B. Irvine argues that this is the reason many people are unhappy:

“We humans are unhappy in large part because we are insatiable; after working hard to get what we want, we routinely lose interest in the object of our desire. Rather than feeling satisfied, we feel a bit bored, and in response to this boredom, we go on to form new, even grander desires.”

Paradoxically , many people find that the real joy often comes from the pursuit of destinations, rather than the destinations themselves.

The Role that “Flow” Plays in Happiness

Often when we pursue things we want, we enter a “flow” state, which Hungarian-American psychologist Mihaly Csikszentmihalyi describes as:

“A state in which people are so involved in an activity that nothing else seems to matter; the experience is so enjoyable that people will continue to do it even at great cost, for the sheer sake of doing it.”

This is the feeling of being so focused and in-tune with the present moment or a certain task that you lose track of time. Csikszentmihalyi shares that the more we’re able to enter a “flow state” on a consistent basis, the happier we tend to be.

Personally I experience a sense of flow and lose track of time when I’m doing one of two things:

(2) Spending time with people I love

Consequently, the more time I spend doing these things, the more fulfilled I feel. And, based on conversations I’ve had with others, it seems that these are also the two main things that put most people into a “flow” state.

I once tweeted out that if you have the freedom to spend time doing these two things each day, you have everything you need in life:

The Role That Money Plays in Happiness

“Money can buy many things, but nothing more valuable than your freedom.” -J.L. Collins

If a flow state tends to arise from spending time doing meaningful work and being around people you love, then we should all seek to maximize the time we can spend on these two things.

It turns out that money is the tool that we can all use to buy more time to spend on these things. 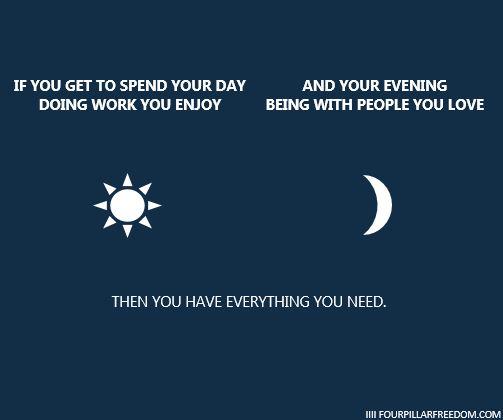 It’s important to recognize that achieving financial independence (or whatever financial goal you wish to attain) won’t bring you lasting happiness in and of itself. It might not even change your daily routine that much – you may still spend a significant amount of time working. The difference is that you’ll have the freedom and space to spend more time on activities that put you in a flow state.

You might still do activities that look like chopping wood and carrying water, but they’ll be much more meaningful if they’re activities that you choose to do simply because you find fulfillment in doing them.