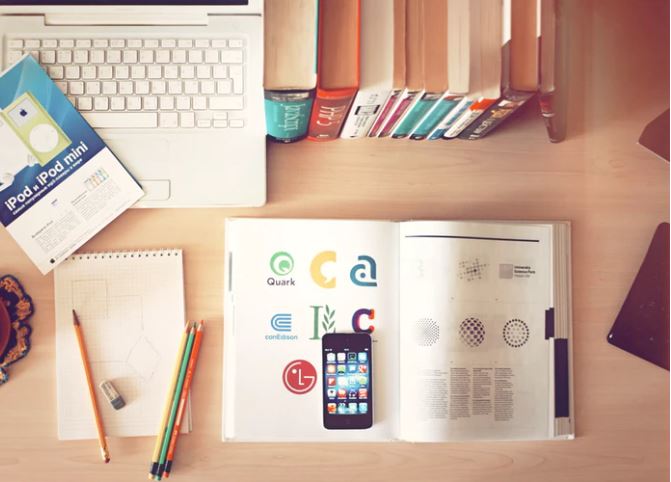 Earlier this week I explored the question: should you move to a new city to increase your income?

I shared that I currently earn a salary of $80k (before taxes) as a data scientist in Cincinnati, that I spend about $24k per year, and that I’m able to save and invest about $36k per year using my current salary. I then analyzed whether or not I would be able to save and invest more each year by moving to a new city like San Francisco where the salaries for data scientists are considerably higher.

Ultimately, the only way I could actually save and invest more each year by moving to a new city is if the difference between my salary and cost of living was greater than what it currently is in Cincinnati. Often times, cities that offer higher salaries also have a higher cost of living.

This brings up an interesting question: Are there cities in the U.S. where data scientist salaries are high relative to the cost of living?

To answer this question, I use the Nerdwallet Cost of Living Calculator to find data on cost of living, PayScale and indeed* to find data on average data scientist salaries, and SmartAsset to find data on income taxes in various cities around the U.S. to find out if I could actually save and invest more each year by moving to a new city.

*I take the average between the two average salaries listed on PayScale and indeed, since both sites use different algorithms to calculate average salary.

Median Salary vs. Cost of Living in 15 U.S. Cities

In total, I gathered data for 15 major U.S. cities. The following table shows the median data scientist salary in each city, the total taxes (including Federal, FICA, State, and Local) I would pay on that salary, the equivalent cost of living expenses based on my $24k expenses in Cincinnati, and the annual savings I would actually accrue after paying taxes and cost of living expenses: 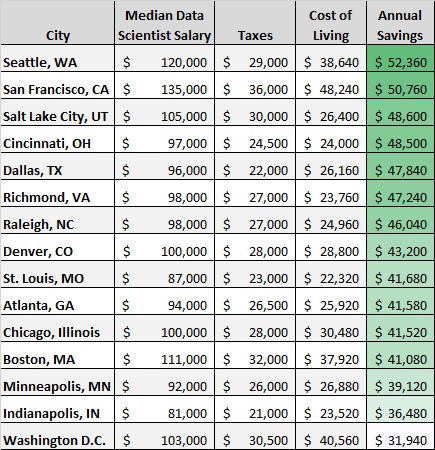 Here’s a visual look at the annual savings I could potentially accrue in each city: 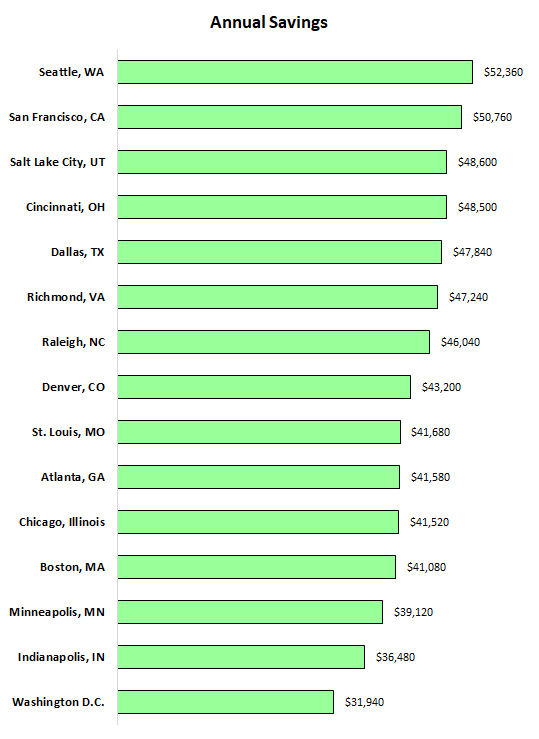 Based on this data, I could boost my annual savings by a few thousand bucks by moving to a west coast city like Seattle or San Francisco. Although the cost of living is considerably higher in those cities, I would be able to offset those expenses with a higher salary.

It’s encouraging to see that my current city of Cincinnati offers one of the highest annual savings amounts: 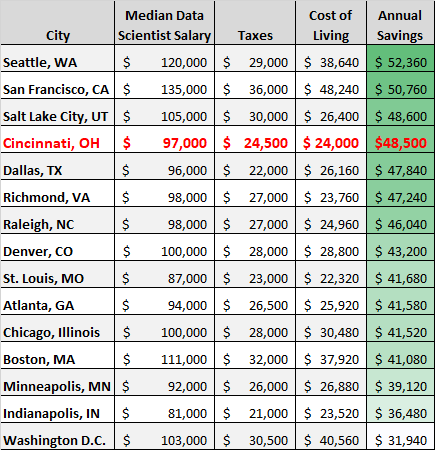 So, even though Cincinnati doesn’t offer the highest data scientist salaries, it does offer a low cost of living, which means someone like myself is able to save a huge chunk of my salary.

It’s also interesting to see that although Washington, D.C. offers one of the highest median salaries, it offers the lowest potential annual savings due to the high cost of living: 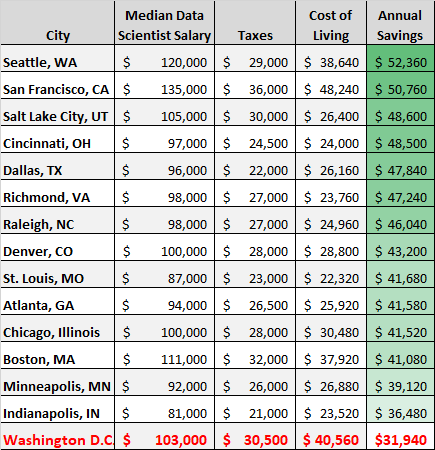 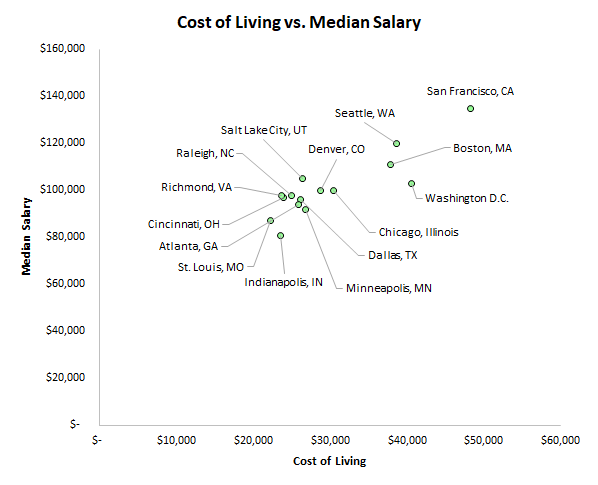 After running the numbers, I can see that Cincinnati offers a pretty good data scientist salary relative to the cost of living. In most cases, moving to a new city actually wouldn’t allow me to save much more than I’m currently saving.

It’s important to keep in mind that the amount you save from your salary is more important than the salary itself. Personally I could boost my salary to $100k or higher by moving to a major tech hub, and although that might feel good to know that I make six-figures, it likely wouldn’t help me reach my financial goals any quicker due to the higher expenses in cities that offer that type of salary.

If you’re considering moving elsewhere to boost your salary and turbo-charge your path to your financial goals, make sure you run the numbers first. A higher salary can easily be offset by a higher cost of living.