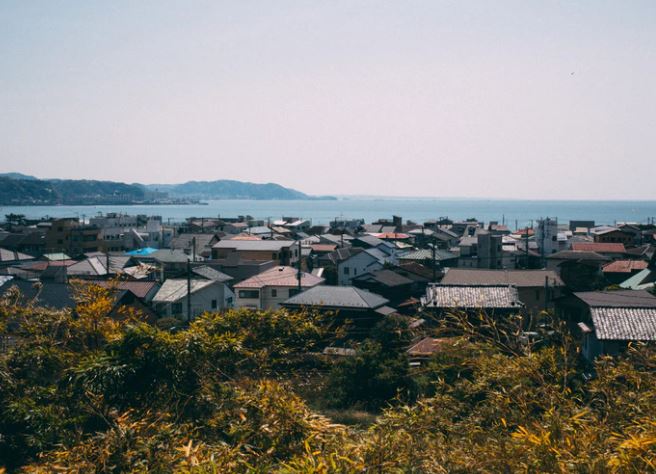 For most households, the three biggest yearly expenses are housing, transportation, and food. According to the 2017 Consumer Expenditure Report, these three expenses alone account for 62% of total household spending.

For example, according to the NerdWallet Cost of Living Calculator, these three expenses vary wildly between San Francisco and Cincinnati:

Some cities are simply more expensive than others.

An obvious way to reduce your living expenses is to move to a LCOL area. However, LCOL areas tend to offer lower incomes. If your goal is to save as much money as possible each year, both the amount you earn and the amount you spend matter.

Consider the following example of two people who lead similar lifestyles and both work as data scientists. One lives in San Francisco and the other lives in Cincinnati:

In this post, I explore the financial pros and cons of living in HCOL vs. LCOL areas.

HCOL vs. LCOL: Why the Price Difference?

Before we jump into the pros and cons of HCOL vs. LCOL living, it’s helpful to understand why cost of living differences exist between different areas.

Why are the cities in the first list so much more expensive to live in than the cities in the second list? The simplest explanation: more people want to live there. This leads to higher prices in housing, transportation, and food, among other things.

In Basic Economics, Thomas Sowell provides a simple explanation of why some places are more expensive than others, using beachfront property as an example:

“The inherent reality is that there are not nearly enough beachfront homes to go around and prices are just a way of conveying that underlying reality. When people bid for a relatively few homes, these homes become very expensive because of supply and demand.”

Most people would love to live in a beachfront home. Thus, high demand for these types of homes drives prices higher.

Similarly, there are characteristics of HCOL areas that make them desirable: thriving job markets, career opportunities, lots of things to do, good weather, a fun environment to live in, quick access to the ocean, mountains, lakes, or forests, etc.

It’s not that hard to understand why many people want to live in Denver:

When lots of people desire to live in a certain area, the cost of living rises in that area. It’s basic supply and demand.

Cost of Living Varies Within Cities

Just like cost of living varies between cities, it also varies within cities. Cincinnati might be a LCOL city overall, but there are certainly neighborhoods within the city that are far more expensive to live in than others.

In one article on Wander Cincinnati, I created an interactive map that displays the median house value in every census tract in the city. 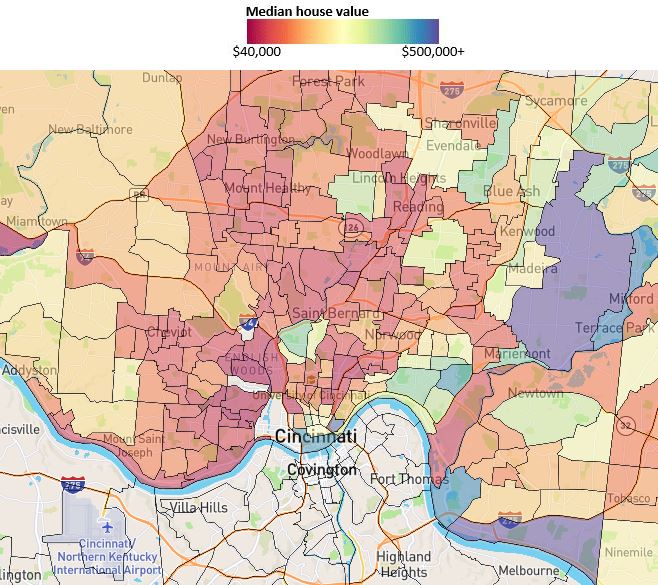 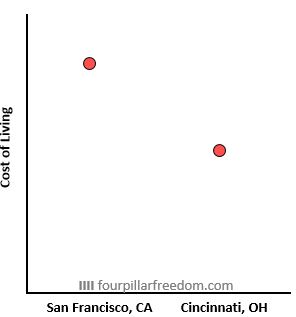 But in reality, cost of living can vary significantly within a city depending on the lifestyle you lead: 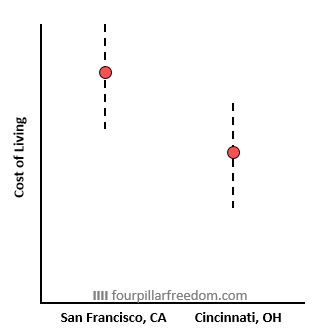 No matter what type of city you live in it’s always possible to increase your expenses through lifestyle inflation.

On the flip side, it’s also possible to minimize your expenses even in a HCOL city through buying a home that suits your needs, minimizing transportation costs, living modestly, and using free financial apps like Trim and Personal Capital to track and optimize your finances.

One of my favorite examples of someone who has found ways to live frugally in big cities is my friend David from CityFrugal. His comprehensive guide to frugal city living can teach you exactly how to minimize costs in HCOL areas without sacrificing your quality of life.

Focus on Where Your Income Goes Furthest

No matter what financial goals you have, the fastest way to hit those goals is to create a large gap between your income and expenses. And one of the easiest ways to create that gap is to live in an area where you can earn a high income relative to your expenses.

Notice that City C doesn’t offer the highest income. Nor does it offer the lowest expenses. However, it does offer the biggest gap between income and expenses. In other words, the income you can earn in City C is highest relative to the expenses you must pay to live in that city. That’s a great place to live if you want to accumulate a boatload of savings.

Fortunately, Hiring Lab did the heavy lifting for us in this study by finding real life examples of City C around the U.S.  – places where you can earn the highest salary relative to the cost of living in that city.

The following graphic displays the ten places where adjusted salaries are highest:

Interestingly, each of the places on the list are small and mid-size metros.

Be sure to check out the interactive tool in that post to explore how adjusted salaries compare among various areas around the country.

One popular strategy that people on the road to early retirement use is live in a HCOL area during their accumulation phase, then move to a LCOL area once they have enough money saved up to retire.

For example, consider our friend Arlo who wants to accumulate as much money as possible by working in a HCOL area for 10 years, then retiring early to a LCOL area.

Let’s assume his potential income and expenses would be as follows in San Francisco compared to Cincinnati:

Despite the fact that it’s much cheaper to live in Cincinnati, it would make more sense for Arlo to live and work in San Francisco for 10 years since he could save more money each year by living there. Then, after 10 years he could move to Cincinnati and enjoy the low cost of living environment since he no longer needs a high income.

I actually performed this exact exercise when I was deciding to either stay in Cincinnati or move to see if I could earn a higher data scientist salary elsewhere. When I ran the numbers, I found that Cincinnati actually offered one of the highest salaries relative to the cost of living here:

Although places like Boston and Washington D.C. paid higher median salaries, the high cost of living in those cities meant that I would actually be able to save less than if I stayed put in Cincinnati.

If you’re considering the strategy of living in a HCOL area and then moving to a LCOL area once you have enough money saved up, I encourage you to run the numbers first.

Due to the rise of the internet, it’s more plausible than ever to earn a full-time income online. Whether this means running an online business, being an online freelancer, or working remotely for a company, more people now work outside of an office than ever before.

This is essentially what I’m doing: I live in the LCOL city of Cincinnati and earn a full-time living through running websites. This means my income has the potential to increase indefinitely while my cost of living stays quite low.

Related: If you’re interested in starting your own website, check out my guide here. If you’d like a 1-on-1 consultation on how to grow traffic to your site and monetize that traffic, feel free to schedule a session with me here.

Nowadays, remote work has completely changed the game. For those who earn an income online, they don’t have to worry about moving from a HCOL area to a LCOL area to make early retirement a reality. Instead, they get to enjoy the freedom of working from home, skipping out on a commute, and embracing the potential of increasing their income indefinitely.