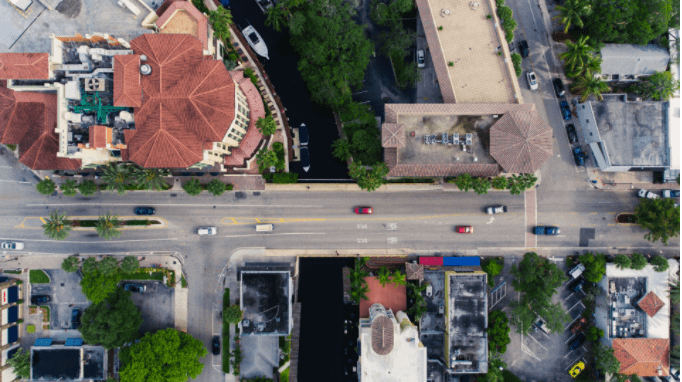 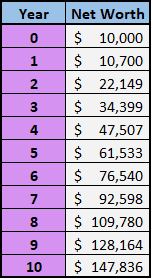 This example assumes you earn 7% investment returns each year. In reality, S&P 500 returns can fluctuate wildly from one year to the next.

To see how important investment returns have been historically, I went back and looked at actual market returns since 1928.

The chart below shows how much of your net worth would have been composed of savings compared to investment returns for every 10-year period since 1928. It assumes you start with a net worth of $0 and invest the same amount each year exclusively in the S&P 500.

NOTE: The amount invested each year is irrelevant since we’re only concerned with percentages, not dollar amounts. The percentages are the same whether you were to invest $10,000 or $100,000 each year. 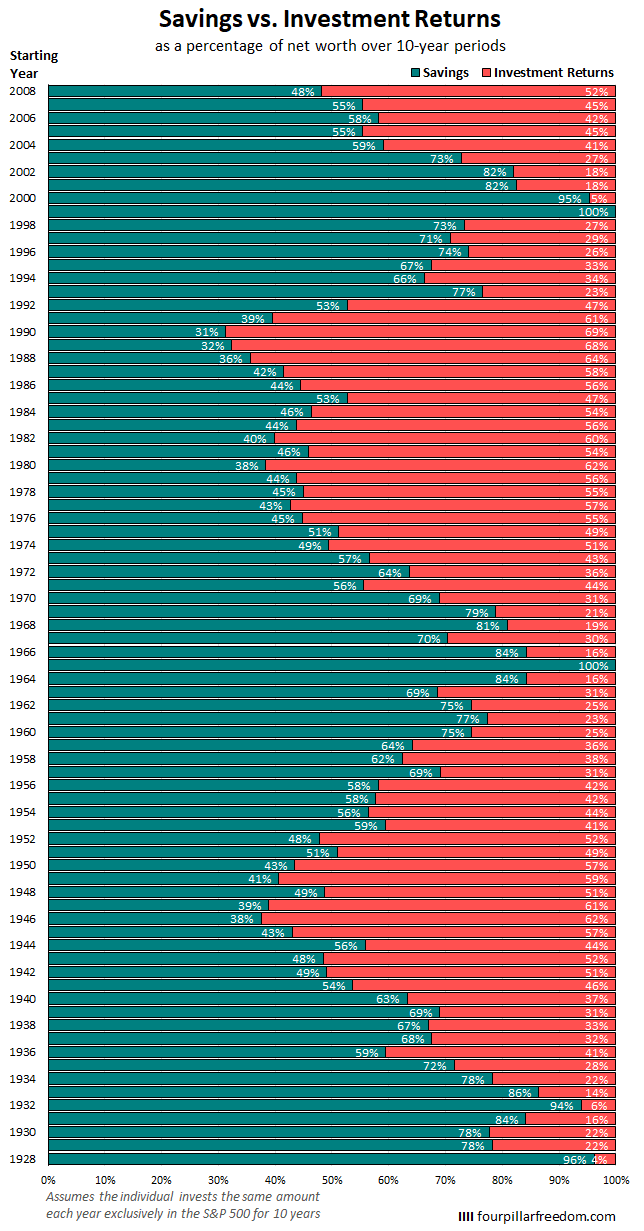 Even during the best 10-year investment periods, savings still accounted for 31% of net worth.

Savings accounted for 61% of net worth, on average, among all 10-year periods.

Now let’s take a look at all 20-year periods, using the same assumptions as before: 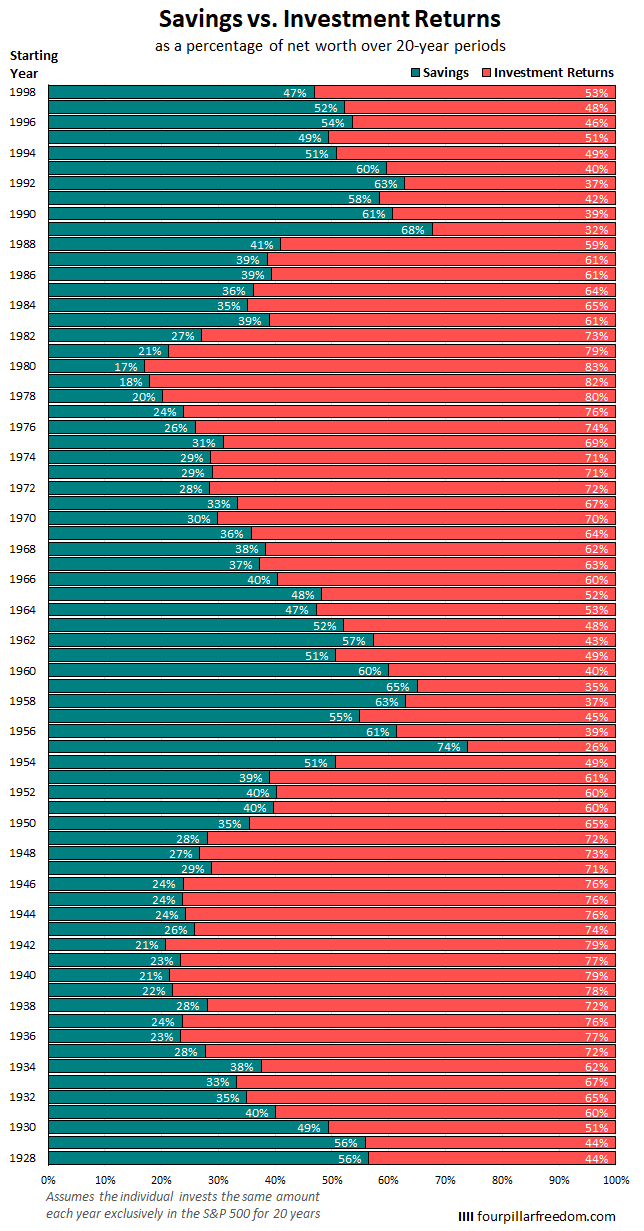 Savings accounted for 39% of net worth, on average, among all 20-year periods. 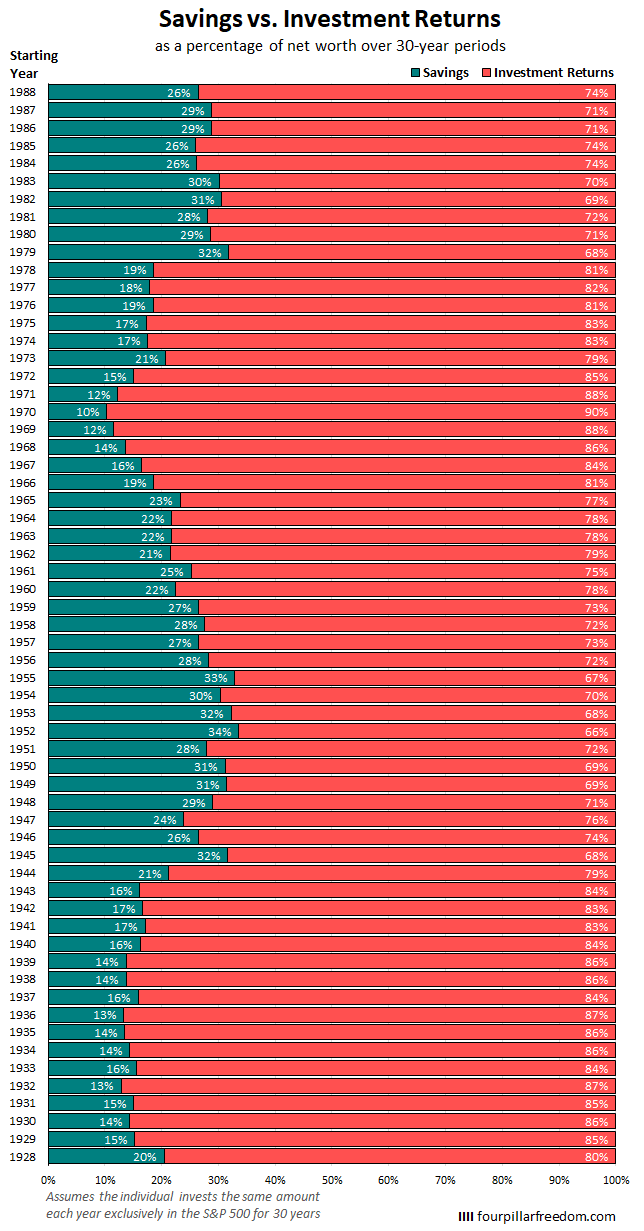 Savings accounted for 22% of net worth, on average, among all 30-year periods.

It’s pretty insane how much investment returns can fluctuate during 10-year periods. During a period like 1999 – 2008, you would have received no help from the stock market in pushing your net worth higher.

Contrast that with a period like 1990 to 1999, where investment returns accounted for a mind-boggling 69% of your net worth.

While this might seem alarming for those of us who are trying to go from $0 to retirement in 10 years or less, keep in mind that a high savings rate is more important than spectacular investment returns in the short-term. 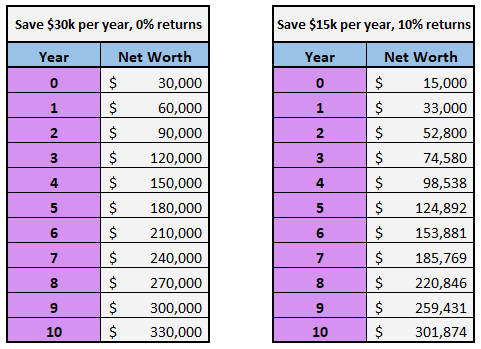 For anyone trying to go from $0 to retirement in 10 years or less, savings is far more important than investment returns. If your savings rate is high enough, a poor decade of returns won’t crush you. And if you do catch a great decade of returns, that’s just icing on the cake.

Notice, however, how investment returns account for a higher percentage of net worth during 20-30 year time horizons. This is because compound interest becomes incredibly powerful when given this amount of time to do its work.

While savings rate is a powerful tool in the short-term, compound interest is a beast in the long-term.