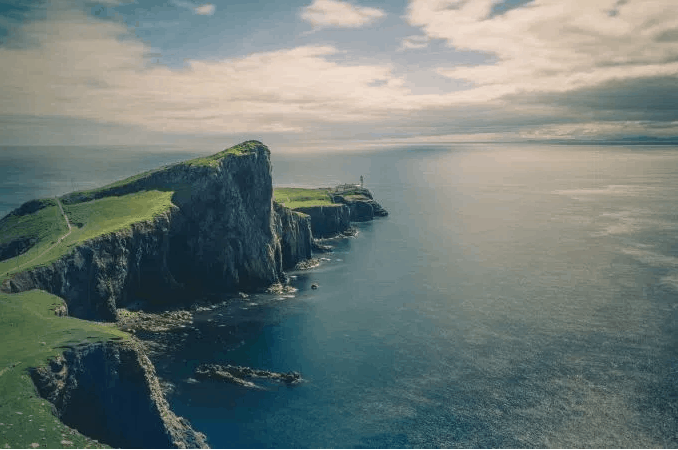 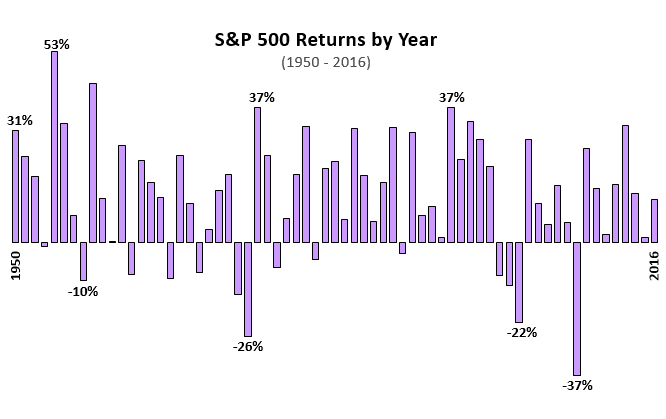 If we order the yearly returns from largest to smallest, here’s what it looks like: 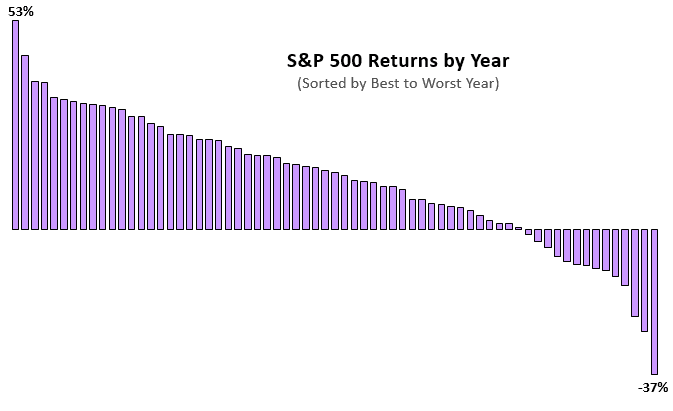 During most years, the S&P 500 has a positive return. But as you can see, there are some years where there are significant negative returns.

It’s About Dollars, Not Percentages

Many people on the road to financial independence invest in the S&P 500 or a similar index fund that tracks the stock market. But most people who invest are overly obsessive with their percentage return on their investment, instead of the actual dollar return.

The actual dollar return on your investment is what’s important, not so much the percentage return.

Let’s look at the actual dollar returns of the S&P 500 during the best and worst years ever (since 1950) based on portfolio size: 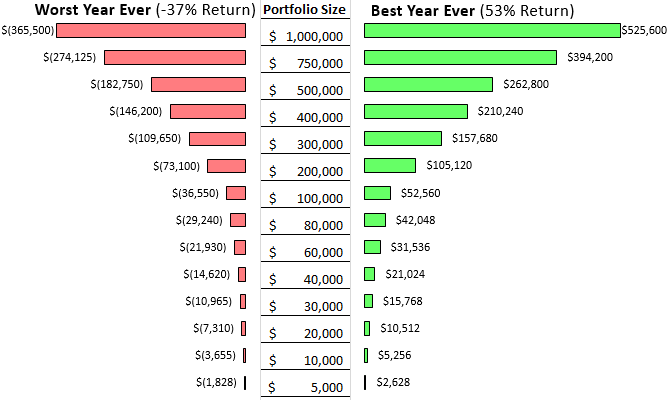 This chart illustrates an important point: The amount of money you have invested determines how important investing returns are. This is something people are prone to forget.

I remember during my early years of college I was obsessed with tracking the market. I checked stock charts on my phone during class several times per day, but I only had around $5,000 invested. So even if the market had a repeat of the worst year ever and lost 37% of it’s value like it did in 2008, I only would have actually lost $1,828. That’s not life changing.

But also consider someone who has a pretty hefty-sized portfolio of $100,000. During the worst year ever, they lost roughly $37,000. So if they could have saved more than $37,000 over the course of the year from their day job, their net worth still would have increased.

This brings up another important point: too often people with small to medium-sized portfolios obsess over investing returns, when in reality they should be focusing their attention on income generation. Investing returns, no matter how good or bad, won’t impact your net worth nearly as much as your savings rate when you’re just starting out.

Now consider this thought experiment: Let’s say a “really good” year for the S&P 500 is one that has higher returns than 75% of all the other years. This would be a year that has roughly a 23% return: 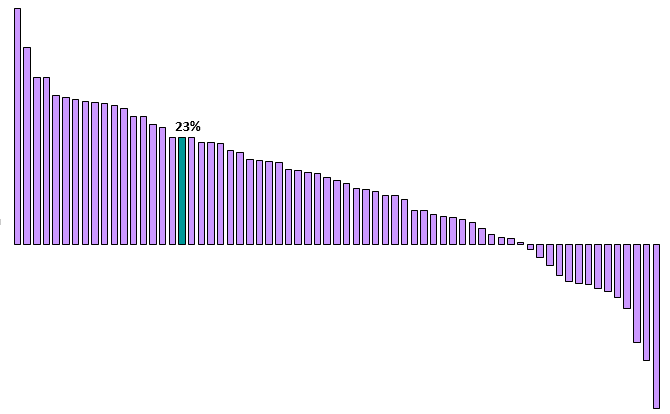 Here’s what the actual dollar return would be on a “really good” year for the S&P 500, based on portfolio size: 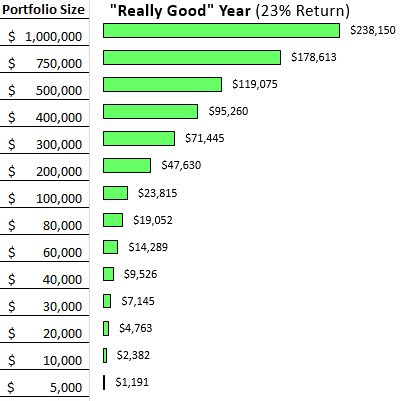 You would need to invest over $40,000 in the S&P 500 even during a really good year to earn more than $10,000 from investing returns. Once your portfolio size breaches $100,000 and beyond, the investing returns start to become significant. But up to that point, investment returns even during “really good” years won’t make a huge impact on your net worth if your portfolio is small.

Build Your Foundation, Then Watch It Grow

From the charts above, it’s pretty clear that for investing returns to actually make a noticeable difference in your journey to financial independence, you first need to have a sizable portfolio. The only way to do this is to focus on earning more and increasing savings rate as much as possible. Once you’re able to build up a nice-sized foundation of savings, then investing returns can begin to make a bigger difference.

Once you reach a certain point, investing returns will begin to contribute more to your net worth than your savings can. But until then, it’s best to focus on saving as much as possible to make investment returns worthwhile.

If you’d like to discuss your own personal finance journey or just say hello, shoot me an email at fourpillarfreedom@gmail.com. Thanks for reading 🙂