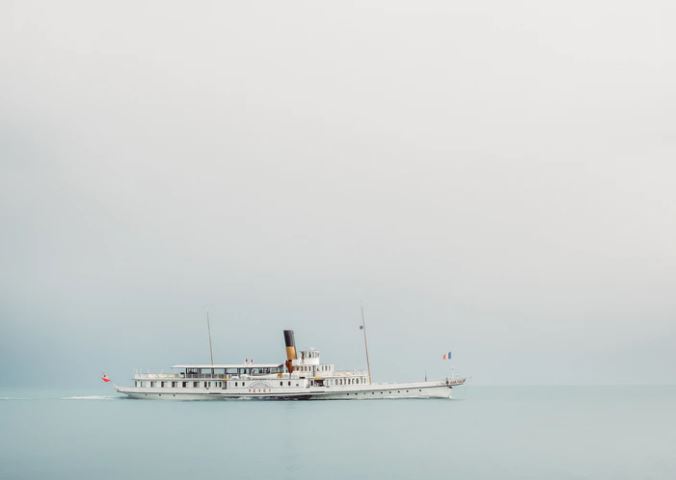 I’ve written before that investing in a broad market index fund is the simplest, most straightforward way for the average investor to gain maximum diversification, earn market returns, and minimize management fees.

An example of one such fund is the S&P 500, which is a stock market index fund composed of the largest 500 publicly traded companies in the U.S. When you invest in the S&P 500, you gain exposure to a variety of companies that all earn revenue in different ways.

Each of these companies holds a place in the S&P 500 and each earns their revenue in different ways.

The moral dilemma that some investors deal with, though, is wanting to earn investment returns without investing in companies that earn revenue in ways they don’t necessarily agree with.

For example, some people dislike the idea of investing in the S&P 500 because it inevitably means that some of their capital will be invested in “sin stocks” – stocks involved in sectors like alcohol, tobacco, gambling, and firearms manufacturing.

On the other hand, some investors actually like the idea of only investing in sin stocks, since these tend to be the type of stocks that are resilient during any economic conditions.

Fortunately, whether you’re interested in avoiding sin stocks or investing exclusively in them, there are index funds that allow you to do both.

Before you jump to invest in one of these types of funds, though, you should first question whether or not you can expect to earn returns that are comparable to the market.

After all, your heart might feel warm and fuzzy by investing in socially responsible funds, but your investment account might not feel the same if you earn poor returns.

So, in this post I analyze the investment returns of the S&P 500 compared to both “sin stock” funds and socially responsible funds.

There are plenty of “socially responsible funds” out there – funds that invest only in companies that have positive environmental, social, and governance qualities. The definition of “positive” has become a bit blurry, though, since most of these funds hold companies like Facebook, which arguably has some not-so-positive qualities.

The following table displays some basic info for each fund:

Right away we can see two stark differences: VICEX only (as of this writing) holds 39 individual stocks, compared to 404 by DSI. Also, the expense ratio of VICEX is nearly six times higher than DSI.

The following table shows the top 10 holdings for each fund:

It’s interesting to view the top 10 holdings for each fund because, at least for me, when I think of “socially responsible” funds, my mind immediately goes to companies that are doing something like planting trees or installing solar panels around the world. And when I think of “sin stock” funds, I tend to think of companies that sell alcohol and cigarettes.

Comparing the Returns of Socially Responsible Stocks vs. Sin Stocks

The following table shows the total annual returns (including dividends and after fees) for the S&P 500, DSI, and VICEX from 2007 through 2018: 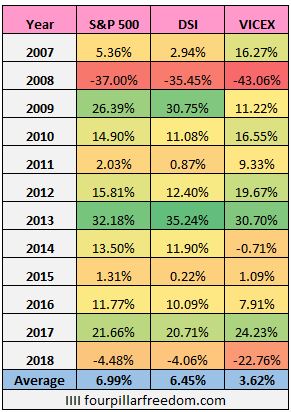 During this time span the S&P 500 performed the best, followed closely by DSI. VICEX lagged behind considerably during this stretch.

The following chart shows the growth of a $10,000 investment into each of these funds at the beginning of 2007: 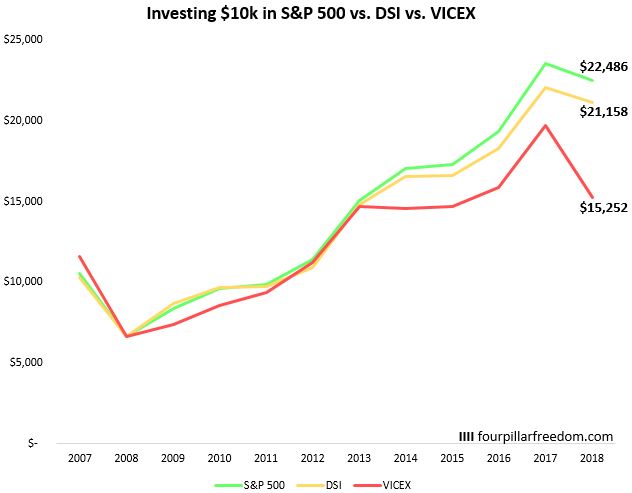 Although DSI and the S&P 500 outperformed VICEX, a large portion of this outperformance came in 2018 alone, when the sin stocks had an atrocious year.

If we only consider the time span from 2007 to 2017, the difference in returns is much smaller: 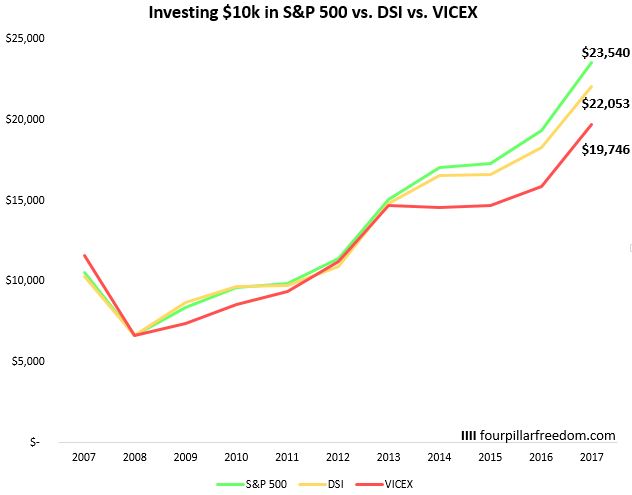 Also recall that DSI only became a fund in 2006, which is why I used 2007 as the starting year for this comparison.

If we instead rewind back to 2002 when VICEX became a fund, we can check out how it performed relative to the S&P 500 during that time: 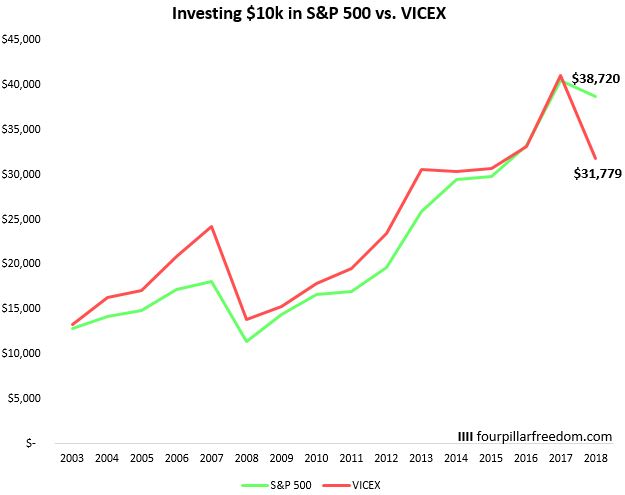 However, once again VICEX only underperformed because of the pitiful year it had in 2018. If we only look at 2003 through 2017, VICEX actually outperformed the S&P 500, even after fees: 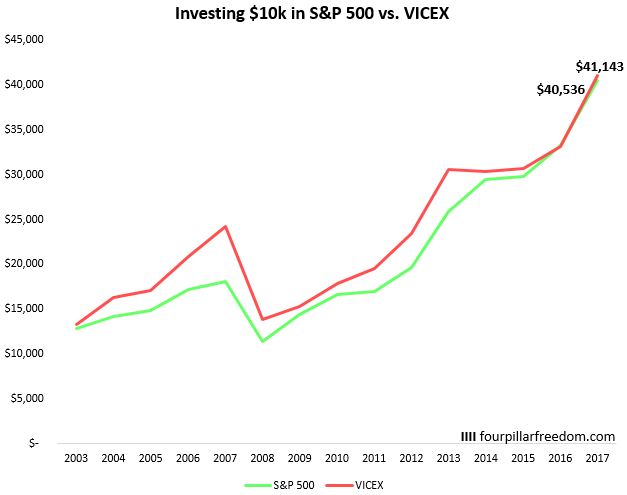 So, we ultimately get different results depending on which time frame we use.

Which Fund Should You Invest In?

The unsatisfying answer to the question of “which fund produces the best returns?” is “it depends.”

During some time frames, sin stocks outperform. During others, the S&P 500 or a socially responsible fund produces better returns.

But although we don’t have a definite answer to which type of fund produces the best returns, we can make a few observations that might help us decide how to invest:

The correlation between the annual returns for the S&P 500 and VICEX was 0.89 from 2003 to 2018, which is quite high. This isn’t surprising, though, given that both funds invest in a basket of stocks, which means they’ll tend to have up and down years in tandem.

Although 2007 through 2018 is a fairly small time frame in the grand scheme of things, the socially responsible fund DSI performed very similar to the S&P 500, lagging only slightly behind. This may be good news for investors who want to invest in a socially responsible manner and are concerned about underperformance.

During the crash of 2008, the sin stocks actually crashed hardest, which is a bit surprising considering many people invest in these types of stocks because they believe they’ll be resilient during economic downturns.

Keep in mind that there are many different sin stock funds and socially responsible funds. I simply used two of the most popular ones for this analysis.

On a non-investment performance related note, it’s important to remember that you should actually check out the individual holdings before you invest in any fund.

Invest in ways that align with your values, but do your research first.