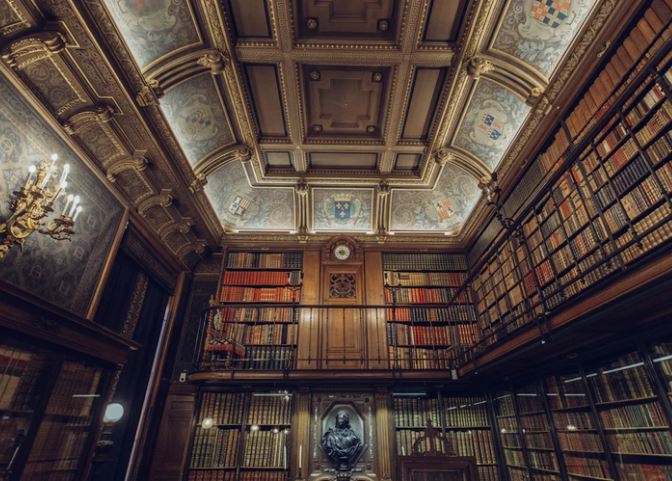 Conventional wisdom says that college graduates earn higher incomes and accumulate significantly more wealth over their lifetimes compared to their non-grad counterparts. And while this has been true in the past, new data shows that the wealth premium associated with a college degree has recently dropped to all-time lows.

In a fascinating new study from the St. Louis Fed, researchers demonstrate that the wealth premium enjoyed by college grads has dropped in recent history and that factors besides a college education could actually explain why some individuals earn higher incomes and accumulate more wealth than non college-grads.

Based on these findings, it’s reasonable for many young people to question whether a college education is still worth it.

For those who aren’t interested in reading the entire 68-page study, I present the main findings here, broken into four parts:

Part 2: However, the wealth premiums of college grads are on the decline.

Part 3: There are factors outside of a college education that impact wealth.

Part 4: Reasons for why the wealth premium of college grads has declined.

Note: All figures and tables included in this post come directly from the original study.

From 1989 to 2016, the share of U.S. families headed by a college grad rose significantly. 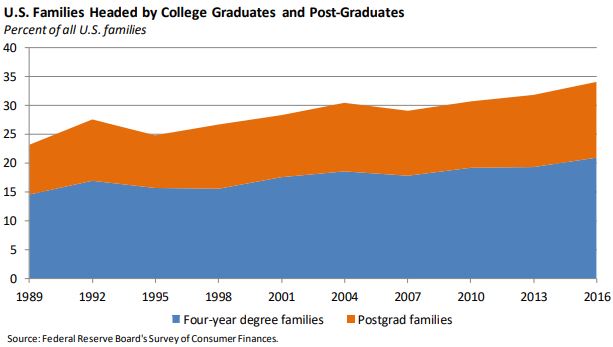 Families headed by someone with a four-year degree or a post-grad degree have consistently earned higher median incomes over time. 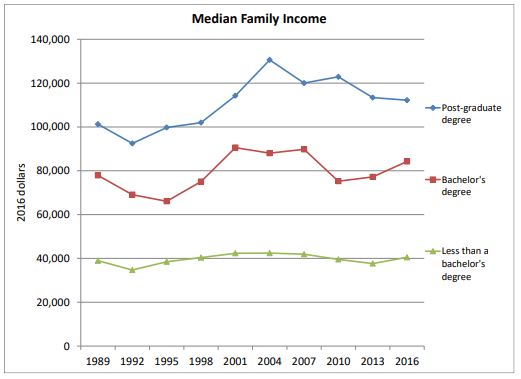 Families headed by someone with a four-year degree or a post-grad degree have consistently had higher median net worths over time. 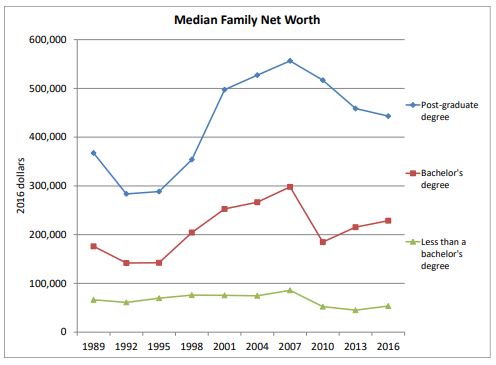 These figures turn out to be misleading, though.

In the upcoming sections, the researchers demonstrate that when you compare families that are similar in terms of race, ethnicity, year of birth, and family size, the college wealth premiums aren’t nearly as large as indicated by the data.

In addition, new data shows that other factors like financial accumen and parents’ education levels significantly impact finances, which college has no impact on.

Part 2: However, the wealth premiums of college grads are on the decline.

Next, researchers matched up families based on race and birth year. 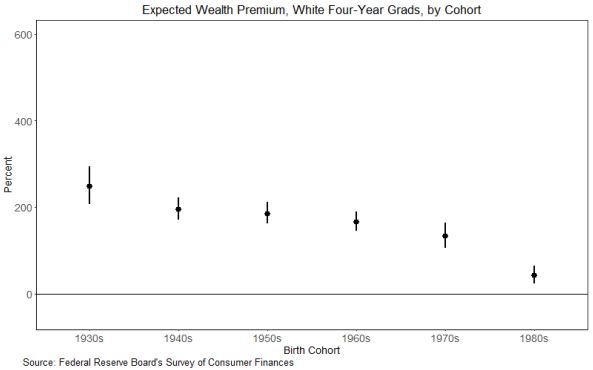 And among black four-year degree holders, the 1930s cohort owned 509% more wealth compared to black non-degree holders, but the difference in the 1980s was statistically indistinguishable from zero. 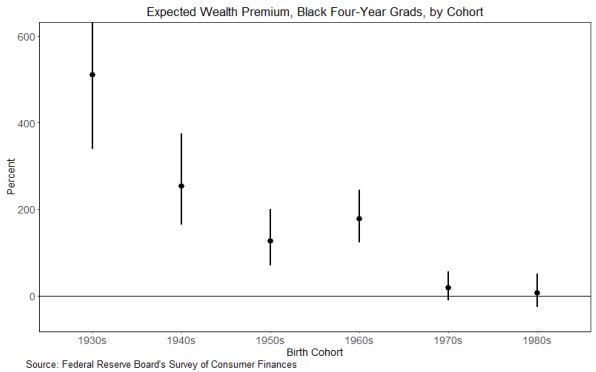 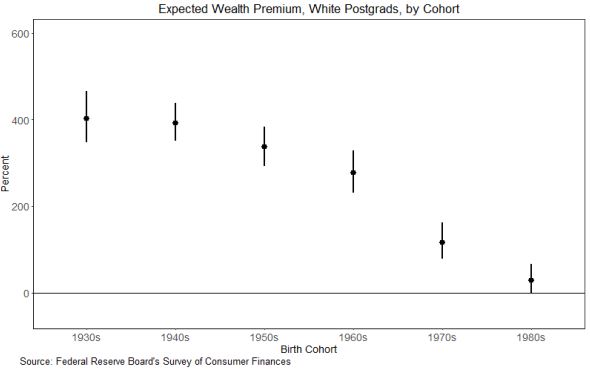 And among white post-graduate degree holders,the 1940s cohort owned 509% more wealth compared to black non-degree holders, but the difference in the 1960s, 1970s, and 1980s was statistically indistinguishable from zero.

“This suggests that, on average, black families headed by post-graduates born in the 1960s, 1970s and 1980s have not accumulated more wealth than black non-grad families born in the same decades.”

Part 3: There are factors outside of a college education that impact wealth.

The researchers note that individuals don’t just randomly decided to attend college. There are many factors that affect this decision.

“The choice to attend and subsequently complete college is not random or arbitrary; it is instead related to numerous financial and non-financial considerations, among them parents’ wealth,  intelligence, socio-cognitive skills, race, financial acumen, and parents’ education. “

While it would be nice to analyze each of these variables, the researchers only had two of them available in the data:

1. The education level of the parents.

2. The “financial acumen” of the individual, which includes financial literacy, self-assessed financial knowledge and risk-taking, search intensity when saving and borrowing, and active saving.

Once the researchers included these two variables in their models, they found that the income premium of bachelor-degree holders and post-grad degree holders dropped by 32% and 29%, respectively.

They also found that the wealth premium of bachelor-degree holders and post-grad degree holders dropped by 54% and 60%, respectively.

“These results contribute to a novel perspective illustrating that the college premium may not be all it seems.

Although four-year college graduates and postgraduates enjoy significant income and wealth advantages over non-grads, attributing these premiums solely to the effect of college would be a mistake.

These analyses indicate that the college premium is inflated, and accounting for other predictive variables allows for a more accurate portrayal.”

In a nutshell: Yes, college grads tend to earn higher incomes and accumulate higher net worths than non-college grads, but they also tend to have more financial acumen along with parents who have higher education levels. These two variables lead to better finances, whether or not you attend college.

To illustrate this idea, consider the following example:

Person A: Has high financial acumen and has two parents who both have four-year degrees. They attend college and proceed to earn a median income of $100k/year during their working career.

Person B: Has low financial acumen and has two parents who both have no college degree. They choose not to attend college and proceed to earn a median income of $40k/year during their working career.

Historically, the only data we used to collect looked like this:

Person A: Attended college. Earned $100k/year during their working career.

Person B: Did not attend college. Earned $40k/year during their working career.

So, we used to conclude that college made all the difference. However, new data tells us that there are factors at play besides a college education that impact wealth. Thus, a college education likely has a much smaller effect on wealth than we previously thought.

Part 4: Reasons the wealth premium of college grads has declined.

Data shows that households with college grads in every decade have earned higher incomes than non-college grads, yet their net worth advantage (when compared to households with similar race, ethnicity, year of birth, and family size) has been rapidly declining. Researchers provide three plausible reasons for this:

The first plausible reason is that older generations (i.e. those born in the 1930s, 1940s, 1950s) were able to invest their earnings in assets that had lower valuations early on in their working careers.

Arguably the biggest reason that the income-premium exists among college grads, yet the wealth premium is declining, is because younger generations are taking on more debt than ever before. 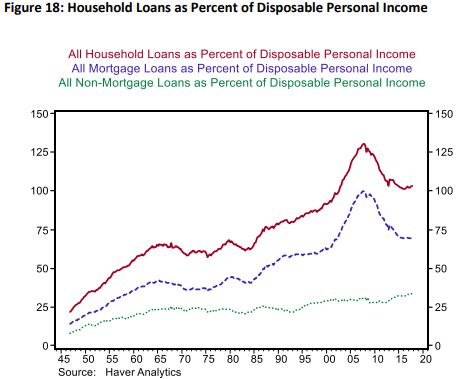 Researchers note that debt ratios actually tend to be higher among college grads compared to non-grads.

“In fact, debt ratios generally are higher among college grads than non-grads. The leveraging of college-grad balance sheets over time is entirely consistent with the progressive weakening of their overall financial positions that we identified.”

So, college grads earn more but they also tend to take on more debt, thus cancelling their ability to grow their net worth relative to non-college grads.

The most obvious reason for the decline in the wealth premium among college grads is the fact that college tuition has risen substantially over time. 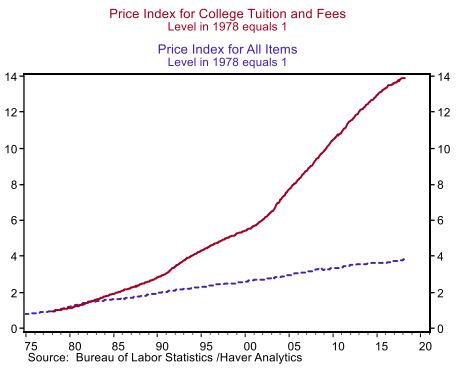 In essence, the higher incomes associated with a college degree are becoming offset by the sheer amount of debt that students must take on to acquire the degree.

Here are the big takeaways from this study:

3. Despite earning higher incomes, the difference in net worth between college grads and non-college grads has been rapidly declining in recent years.

4. Likely reasons for the decline in wealth premium include the fact that college grads tend to take on more debt than non-college grads, and the costs of college have become so high that they significantly impact net worth.