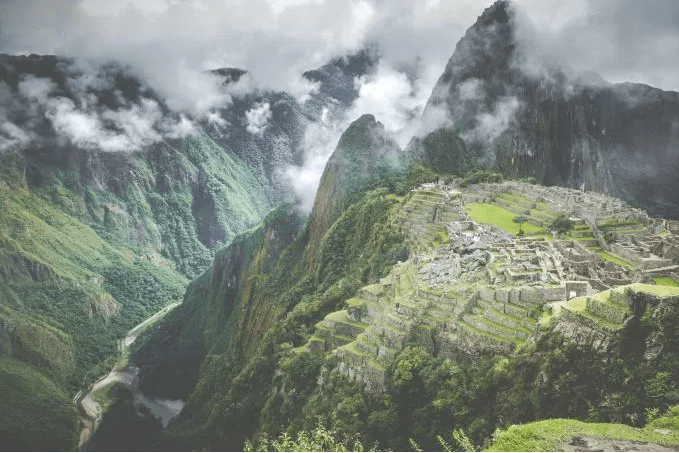 Each year a team of researchers travels the globe and attempts to determine the overall happiness of people in various countries. The results are published in the annual World Happiness Report.

Here are some of my favorite insights from this year’s report.

To determine how well the citizens of each country were doing in these six areas, researchers collected data from thousands of surveys filled out by residents in each country. In total, data was collected for 155 different countries around the world.

Each country received an overall happiness score based on the survey responses across these six factors. Here are the results…

Here are the 30 happiest countries from the report, along with their happiness scores: 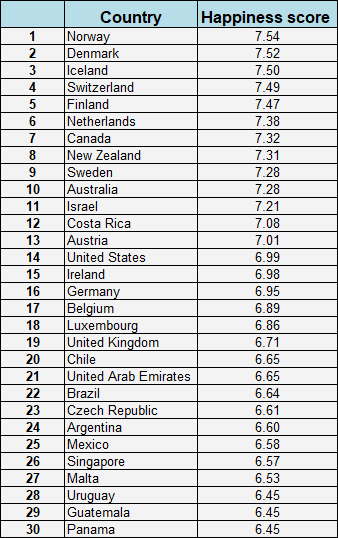 Norway ranked highest among all the countries in the report, with an overall happiness score of 7.54, followed closely behind by Denmark with a score of 7.52.

In general, the Norwegian countries dominated this report. Norway, Denmark, Iceland, Finland, Netherlands, and Sweden all cracked the top 10 in overall happiness. 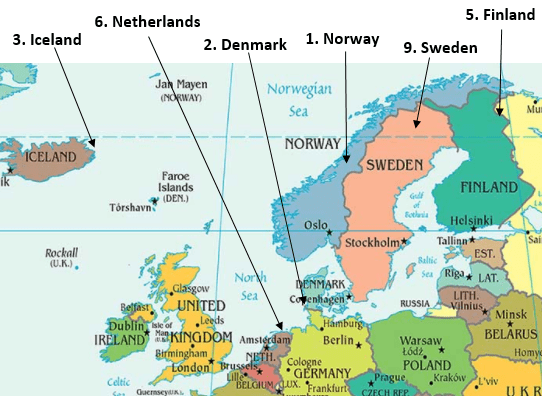 Not every country on the report had citizens who were as happy as the Norwegians, though. At the bottom of the list was the Central African Republic, with a happiness score of 2.69. 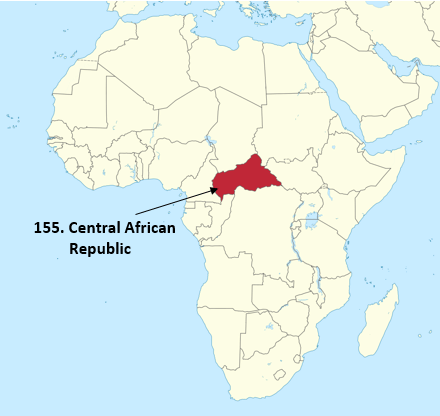 The U.S. has also been dropping in happiness each year since this report first came out a few years ago. This year it landed in the 15th spot, slightly behind the leading Latin American country of Costa Rica at number 13. 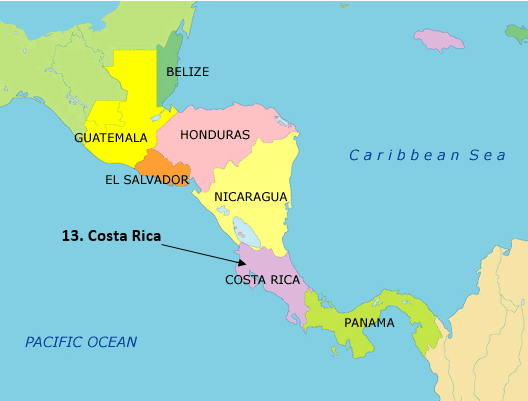 Singapore, home to my second largest group of readers on this blog, came in at number 27, with an overall happiness score of 6.57. 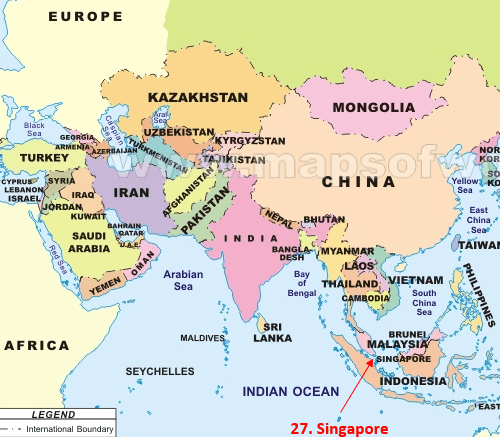 Here’s a look at the happiness scores of every country in the report: 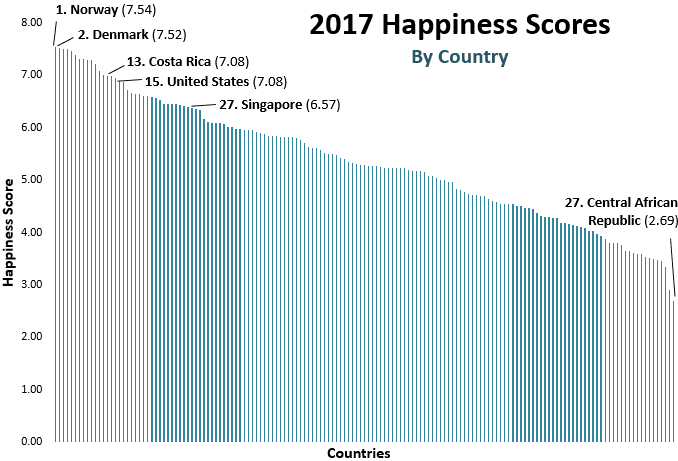 When I read the report, there was one factor I was particularly curious about: how much did wealth impact happiness?

Researchers used GDP per capita to measure the overall wealth of each country. In general, the higher the GDP per capita, the wealthier the country. Each country received a score between 0 and 2 to indicate how much GDP Per Capita impacted the overall happiness of it’s citizens.

To see how GDP per capita and happiness scores compared, I downloaded the raw data and made a scatter plot. Each tiny dot represents a country: 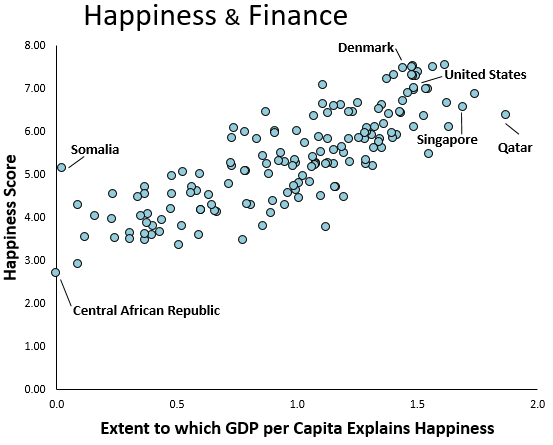 In general, citizens in wealthier countries are happier. No surprise there.

But what’s interesting to see is that two countries can have the same GDP per capita, yet vastly different happiness scores.

For example, GDP per capita contributes to the happiness of citizens to the same extent in Botswana as it does in Costa Rica, yet Costa Ricans are nearly twice as happy. 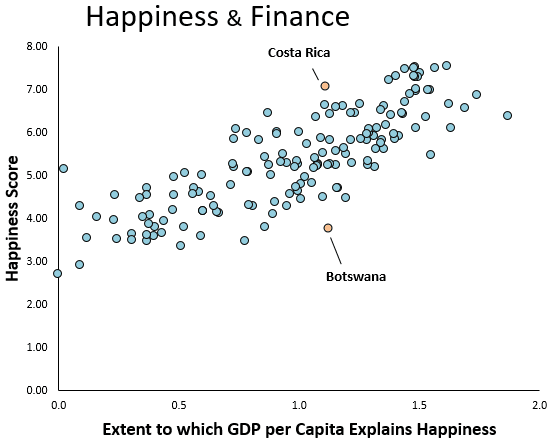 This indicates that wealth by itself can’t explain overall happiness.

It turns out the biggest difference between the happiness of citizens in Botswana compared to those in Costa Rica can be explained by one of the other six factors that contribute to happiness: life expectancy.

Note: Each country received a score between 0 and 1 to explain the extent to which life expectancy contributed to happiness. 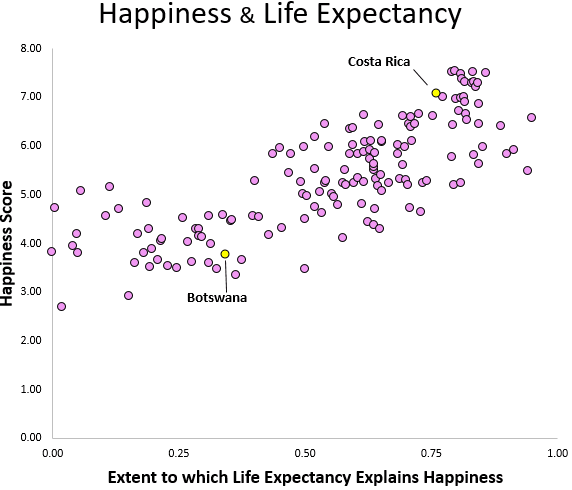 This plot reveals the massive underlying difference between the happiness levels of citizens in Bostwana compared to those in Costa Rica.

A quick google search for life expectancy in these two countries confirms this finding:

On average, Costa Ricans live 24 years longer than Botswanans. That’s a staggering difference. It’s no wonder why the citizens of Botswana aren’t nearly as happy as those in Costa Rica.

Money isn’t so important when you don’t have the means to live a long and healthy life.

If you’re interested in reading the report yourself, you can download the entire PDF here. There’s plenty of insightful findings in the report; I simply shared some of my favorites here.

If you want to see the exact Excel file I used to crunch some of this data and create the charts in this post, you can download it here.

9 Replies to “My Favorite Insights from the World Happiness Report”