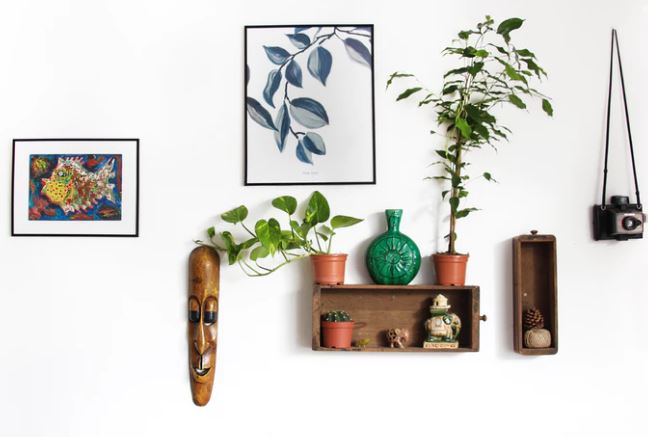 “Many circumstances that seem to block us in our daily lives may only appear to do so based on a framework of assumptions we carry with us. Draw a different frame around the same set of circumstances and new pathways come into view.” -Rosamund Stone Zander, The Art of Possibility

Retirement is a human invention.

According to Wikipedia it was a concept invented by Otto Von Bismark in the late 1800s:

“In 1883, the Germanchancellor, Otto Von Bismarck, in a maneuver against Marxists who were burgeoning in power and popularity, announced that anyone over 65 years old would be forced to retire and that he would pay a pension to them.”

Then, as early as the 1940s, a new concept began to bubble into existence: early retirement. This concept proposed a new way to structure ones life: work for 10 to 20 years and save up enough money during this time to retire decades before the normal retirement age.

As time went on, the concept of early retirement started to gain traction.

The idea that you could use money to buy freedom instead of more stuff became popular when Vicki Robin and Joe Dominguez published Your Money or Your Life.

Then, the Trinity Study provided the analytical evidence to show that one could draw down on a sufficiently large portfolio with a high likelihood of never running out of money in retirement.

Years later, blogs like Mr. Money Mustache and Early Retirement Extreme demonstrated real life examples of people who had achieved early retirement in their 30s simply by saving and investing a huge chunk of their income for a decade.

Recently we’ve seen more examples of people who have successfully exited the rat race in their 30s like Frugalwoods, Mr. Free at 33, Our Next Life, Millennial Revolution, and a list of others.

As early retirement starts to become more mainstream, it’s easy to forget that the concepts of “retirement” and “early retirement” are both simply human inventions. They’re both potential ways to structure ones life, but they’re not the only options on the table.

Barista FIRE is a term that I first discovered from my friend Kevin over at Financial Panther. As he explains it:

Making a legit, full-time income is hard to do and might require you to do work you don’t really want to do. Unless you’re some baller, you’re also probably going to have to work 40 hours per week for most of the year.

But imagine the flexibility you gain in your life when you only need to make $5,000 or $10,000 in a year in order to live. If you’re in a position like that, you can basically do anything you want.”

It’s a simple, yet powerful idea. If saving up 25 times your expenses to achieve financial independence sounds daunting, perhaps consider saving up a smaller amount and choosing to earn active income once you quit your day job through working a part-time job, doing freelance gigs, or running your own small business.

To illustrate this with some numbers, consider a family that needs to spend $40k per year to live comfortably. If they follow the traditional path of “financial independence” then they would need to save up 25 times their annual expenses ($1 million) before they could quit their jobs. This way, they could pull out 4% of their portfolio each year to support their annual expenses with a high likelihood of never going broke.

Consider instead if they only saved up $500k before leaving the rat race. Pulling out 4% of this portfolio would only give them $20k per year. But if they found a way to earn $20k in active income through running their own small business or working part-time at a low stress job, they would be able to cover their $40k in annual expenses just fine.

To see the impact that this has on how many years they have to hang out in a cubicle, let’s consider the example of a household that earns $60k per year post-tax and spends $40k per year. According to the Early Retirement Grid, it would take this couple over 25 years to save up 25 times their expenses, assuming they start with $0 and earn 5% annual investment returns. 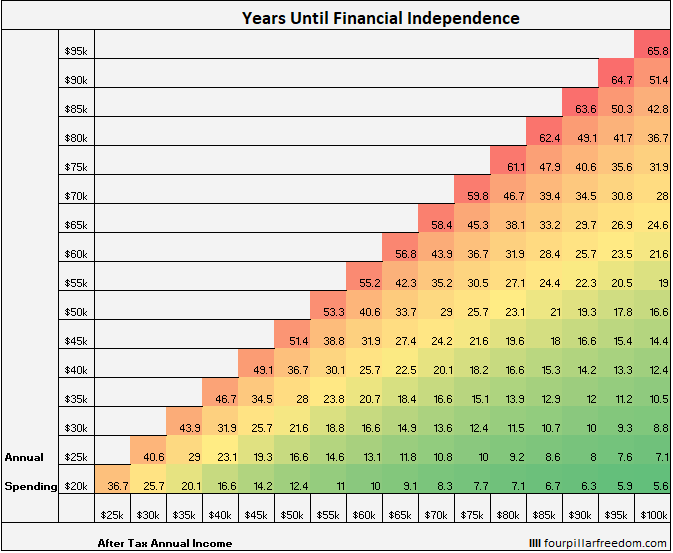 Instead, suppose they only want to save up $500k before quitting the rat race, which is 12.5 times their annual expenses. According to the Financial Flexibility Grid, which shows how long it takes to save up 12.5 times your annual expenses, it would only take this couple 17 years to save this much, again assuming they start with $0 and earn 5% annual investment returns: 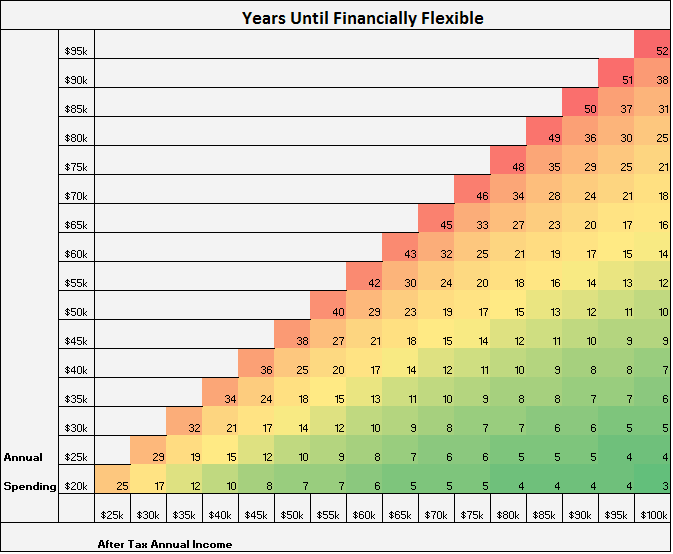 That’s a difference of 8 years.

And once this couple leaves the rat race, they would have more free time to figure out how to earn $20k each year. They could do this through running their own business or doing part-time work.

One real-life example of this that I wrote about in a previous post is a coworker of mine at a math tutoring center who only worked on Saturdays:

In college I used to work at a math tutoring center where tutors got paid $12 per hour. One of my coworkers was a guy in his 40s who only worked on Saturday mornings. He told me he did it just because he loved math and helping students.

Each Saturday we would work a six-hour shift, which meant we earned about $60 after-tax. This guy worked every Saturday which meant he earned an extra $3,120 ($60 * 52 weeks) in income each year.

To put that in perspective, that’s the same as earning dividends from a $104,000 dividend stock portfolio with a 3% dividend yield. By working one day a week at a job he loved, he had the same spending power as a $100k portfolio.

Hypothetically, if he worked twice a week he could earn an extra $120 each week, which would be an extra $6,240 each year. That would be the same as receiving a 3% dividend yield from a $207,000 stock portfolio. It would take most people a decade to build up that type of portfolio.

By working at a job that this guy loved for just six hours each Saturday, he was able to effortlessly bring in an extra $3,120 per year. He would need a $104,000 dividend stock portfolio with a 3% yield to match this income.

Ever since reading Kevin’s post, the idea of pursuing Barista FIRE has been stuck in the back of my head. It simply made more sense to me than sticking it out in a cubicle for a decade or more to accumulate enough money to never work again.

So, I’m actively working on building up my income streams outside of my day job so I can make Barista FIRE a reality. Right now I earn income through dividends from stocks and REITs in my brokerage account, blogging, and stats tutoring. Here is how much I’ve earned each month from these three income streams since January 2017: 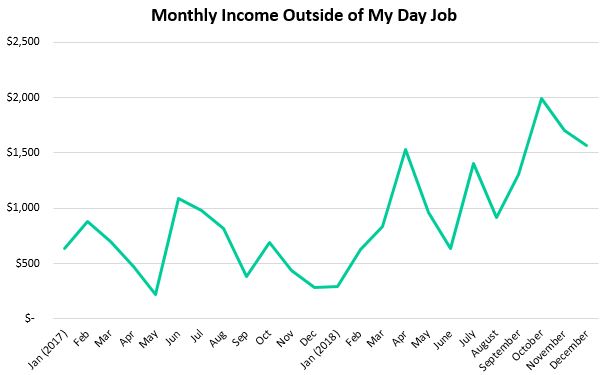 This monthly income has been trending erratically upwards over the past two years.

Typically I spend between $2,000 to $2,500 per month, which means I’m incredibly close to covering all of my expenses purely through my income streams outside of work. Most months I’m able to cover 60-70% of my total spending just through these income streams.

The reason I haven’t quit my day job yet, despite the fact that I could survive on just savings and these alternative income streams, is that I know my spending will increase in the future once I decide to start a family.

I would also feel more comfortable with more savings in the bank. I currently have around $115k in various places including a brokerage account, tax-advantaged accounts, and money market accounts, but I’d like to boost this number higher over the coming year.

In addition to the dividends, blogging, and tutoring, I’m actively growing two more websites that I hope to start monetizing by this summer. With the addition of these income streams, I think I could hit $3,000 in online monthly income by the end of 2019, which would make me seriously consider quitting my day job. Then, with that extra 50 hours of time each week, I could focus on growing my income even more.

The reason that barista FIRE makes sense for me is twofold:

1. I have been able to grow my monthly income outside of work from $0 to $1,500 per month in just two years. I think I can grow this number to $3,000/month and beyond with another 12-18 months of work, which would give me freedom to work for myself now rather than a decade from now when I have $800k -$1m in the bank.

2. I love building websites and blogs because it doesn’t feel like work to me. It’s something I happily do in my free time. Even if I had enough money to never work again, I’d still work on things that I love. I might as well do this work I love now rather than delay it until I’m completely financially independent.

All Financial Paths are Inventions

Retirement is an invention.

Early retirement is an invention.

Barista FIRE is an invention.

All financial paths are inventions. They’re all potential paths you could pursue. If early retirement makes the most sense for you, then go for it. If barista FIRE is more appealing, go for that. I simply encourage you to be open to different paths.

When I first started my financial journey, I was dead set on early retirement. Then, as I began to realize that I love working as long as I own the work and can determine my own hours, I decided that it made the most sense to pursue barista FIRE and start growing my income outside of my day job as fast as possible.

Perhaps you don’t hate having a cubicle job as much as I do and you simply want to take mini-retirements on your way to a full retirement. You’re free to pursue that route as well.

All financial paths are inventions. It’s up to you to pursue one of many paths that already exist or simply invent your own.

11 Replies to “Retirement is a Human Invention”