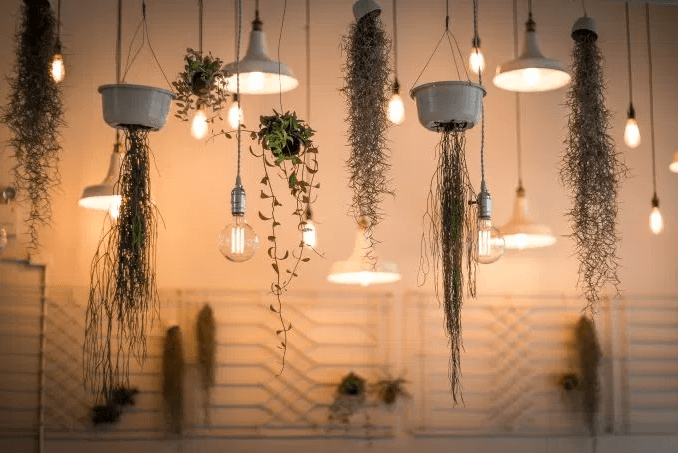 Here are a few numbers to think about. 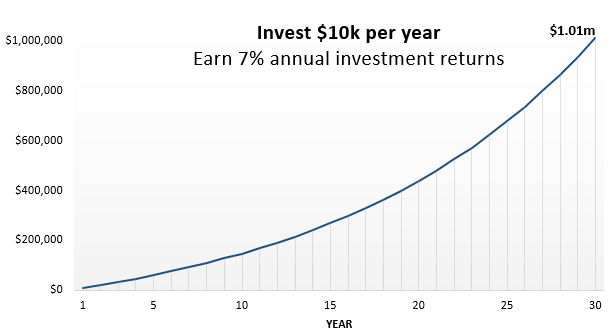 From year 29 to year 30, though, your net worth would grow by $76,122, with most of that growth coming from investment returns.

In that last year, your net worth would increase by about the same amount as the first six years combined. 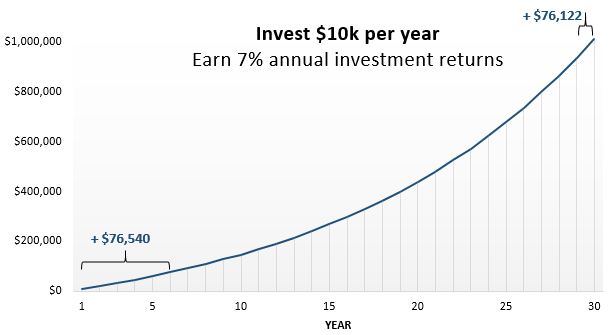 That’s a bit crazy to think about.

Given these first few charts, how much longer do you think it would take to save $2 million?

If you knew nothing about compound interest, you might mistakenly think it would take another 30 years.

Even if you were familiar with the concept, you might think it would take another 15 – 20 years to reach $2 million.

It turns out that it would only take about another 9 years: 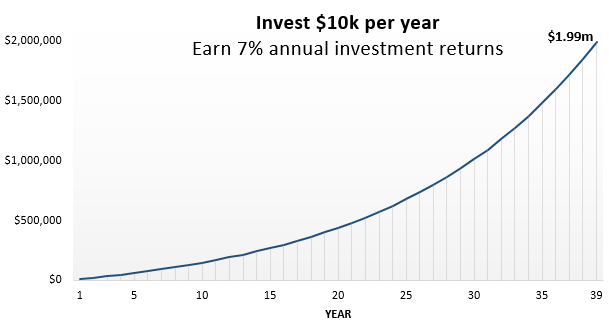 And the growth in the last year would be larger than the first nine years combined: 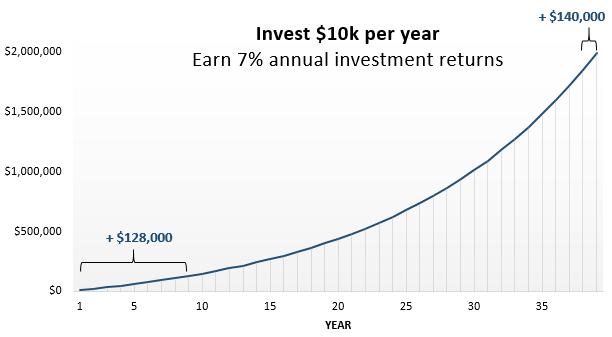 Knowing this, how long do you think it would take to reach $3 million?

Turns out, about six more years: 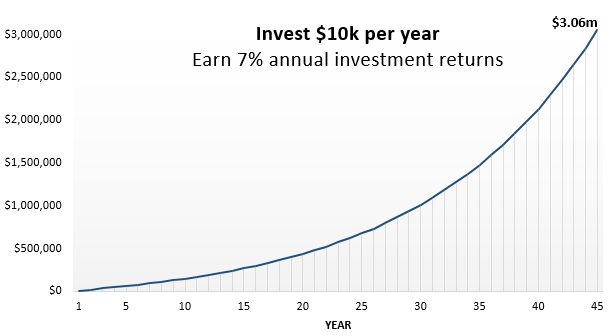 The growth in the last year would be roughly the same as the first 13 years combined: 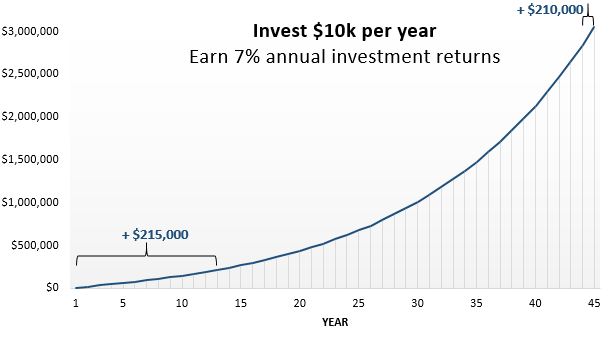 Think about that for a moment. In the last 365 days, your net worth would increase by roughly the same as it did during the first 13 years.

These examples illustrate exactly why compound interest is so counterintuitive to us. It’s hard to wrap our heads around how extreme the numbers get towards the tail end.

Perhaps the best example of compound interest in the wild is Warren Buffett’s net worth growth: 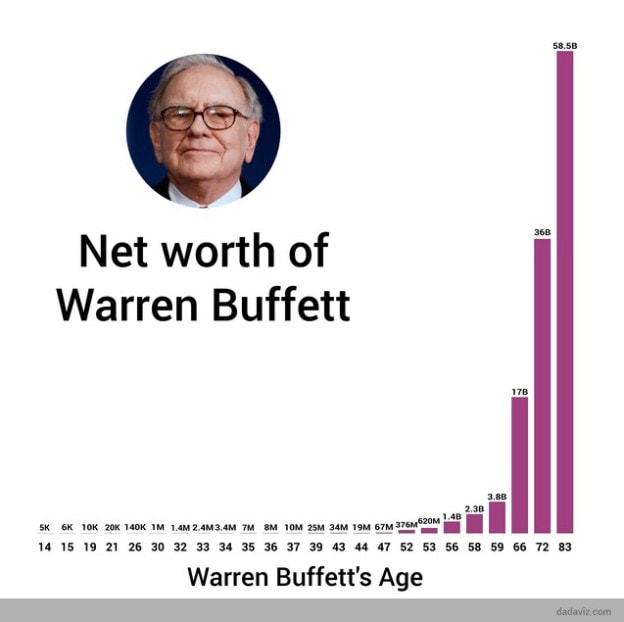 For anyone with a 30+ year time horizon, compound interest will work wonders in the later years.

Unfortunately, it’s not such a powerful force during shorter time frames.

For anyone attempting to achieve a level of financial flexibility in 10 years or less (whether or not that means complete financial independence), you can’t rely on compound interest.

Consider a couple who decides to save $30k per year for 10 years. After that, they may decide to quit their day jobs and pursue a life of part-time work and travel. 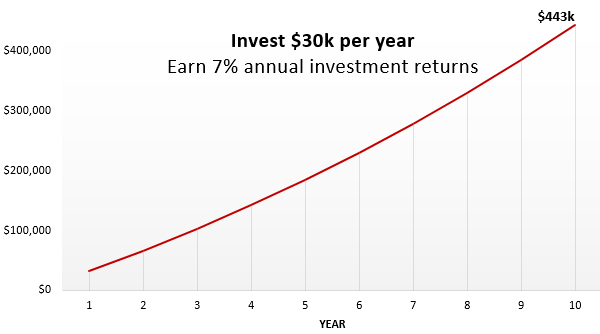 Notice how the net worth growth looks linear here. We don’t see that crazy upward curve at the end of the chart like we did in the previous charts. That’s because we don’t give compound interest enough time to flex it’s muscles. 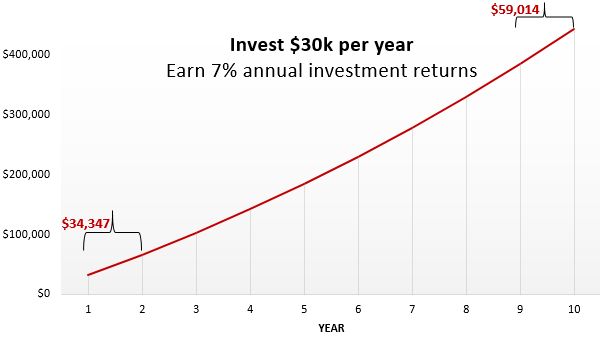 That’s a nice increase, but it’s nothing compared to what we saw in the previous charts.

Compound interest isn’t a powerful force in the short-term (10 years or less), but it’s ridiculously strong over the long-term. In fact, we often underestimate just how strong it can be over the course of several decades.

For anyone seeking a short path to financial flexibility, this means you should focus on your savings rate. You can’t rely on compound interest too much.

You can, however, still take advantage of the power of compound interest. Consider the couple who saves up $400k before quitting their day jobs. Suppose they decide to not touch $100k of those savings and let it grow over time. They’ll use the other $300k if they need to.

In an earlier post, I analyzed how $100k has historically grown over 30-year periods without additional contributions. 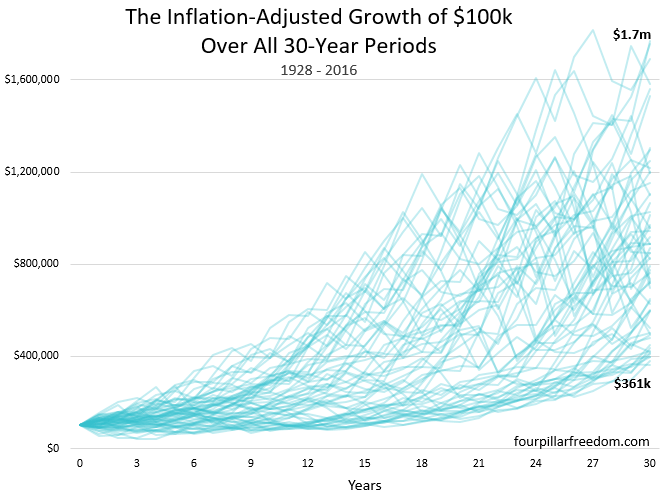 A potential strategy for anyone who wants to retire or semi-retire in 10 years or less is to save up enough money to quit your job, set aside a certain amount of savings to let grow for several decades, and use a combination of active income and savings to cover your living expenses.

This way, you can use a high savings rate to achieve financial flexibility, and still take advantage of the power of compound interest over the long run.