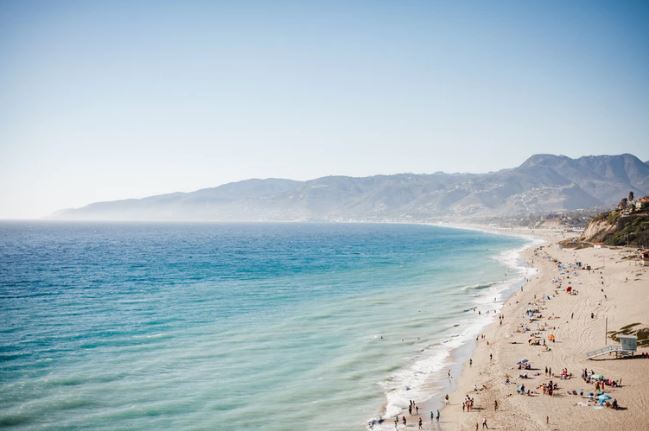 Contrary to popular belief, the term Coast FIRE does not refer to achieving financial independence or early retirement while living on the coast.

Rather, Coast FIRE is defined as having enough money invested at an early enough age that you no longer need to invest any more to achieve financial independence by age 65 (or whatever age you define as a retirement age).

For example, suppose we define financial independence as having 25 times your annual expenses saved up. So, if you spend $40,000 per year then you need $1 million to be financially independent.

Following a Coast FIRE approach, if you could save $182,000 by age 30 and simply not touch that money for 35 years, then it would eventually grow to $1 million by age 65 assuming a 5% annual rate of return after inflation: 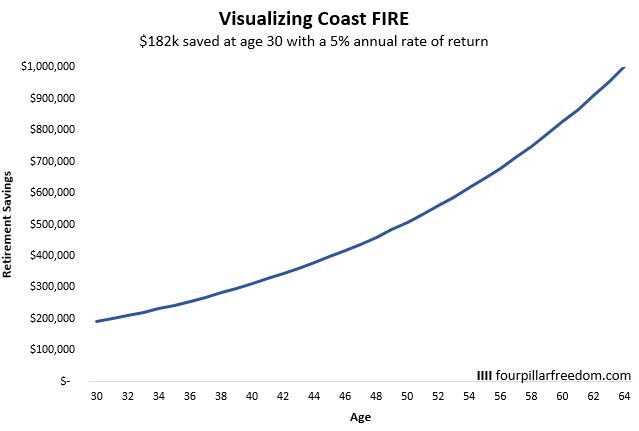 This is a simple example of Coast FIRE. Once you hit $182k in investments by age 30, you can simply “coast” to financial independence over the next 35 years without contributing any more of your savings to investments because you already have enough money invested and enough time on your side to let your investments grow to $1 million by age 65.

This means that if your annual expenses are $40,000 and you currently earn $80,000 per year working at a job you can’t stand, you can transition to a less stressful job that pays $40,000 once you hit your Coast FIRE number since you no longer need a high income to create a high savings rate.

This is why Coast FIRE is so appealing: you can gain a significant amount of freedom long before you’re financially independent.

Related: What is Barista FIRE?

The Secret of Coast FIRE: Giving Compound Interest Plenty of Time to Work

The reason that Coast FIRE works is due to the nature of compound interest.

Compound interest is not a powerful force in the short-term. It is, however, a beast in the long-term.

For example, consider the individual who is able to save $182k by age 30. Assuming a 5% annual rate of return after inflation, their investments will grow by $178k during the first 14 years. 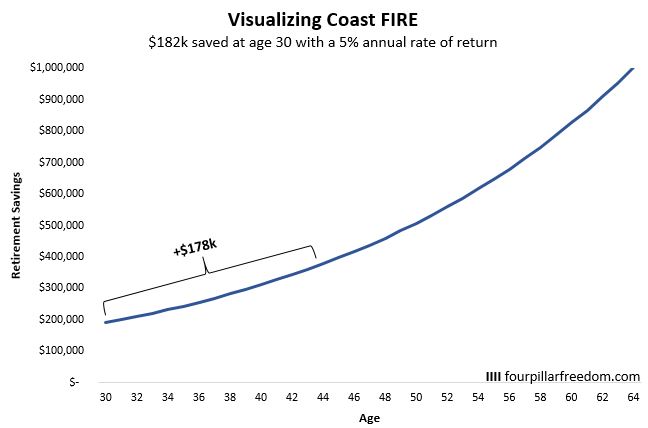 It turns out that their investments will grow by roughly the same amount during the last 5 years: 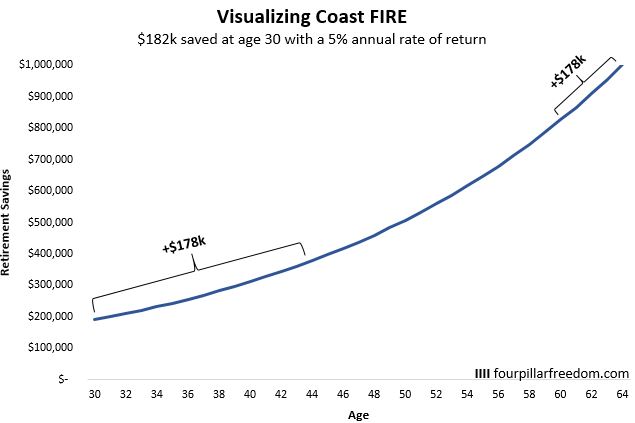 This is the nature of compound interest. The numbers simply get wild at the tail end.

This is why saving $182k by age 30 might not feel like enough to be able to coast to financial independence, but it turns out to be plenty because you give your investments enough time to let compound interest go wild.

Coast FIRE is Especially Powerful in Your 20s & 30s

And it turns out that the sooner you can build up a decent chunk of savings, the less you actually need to save to hit Coast FIRE because time is on your side. This makes Coast FIRE especially powerful for people in their 20s and 30s who are able to give their investments several decades to grow.

For example, if you can save up $142k by age 25 then that would be enough to grow into $1 million by age 65 assuming a 5% annual rate of return after inflation: 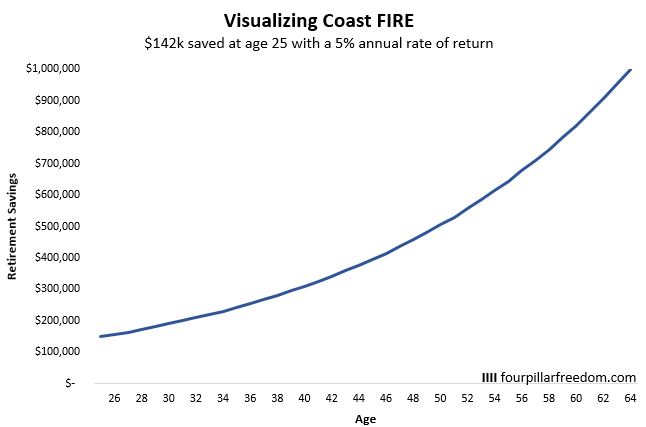 Since you give compound interest a full four decades to work, you are able to capture the serious gains that come towards the tail end. In fact, about half of your total investment growth will come in the last 12 years alone: 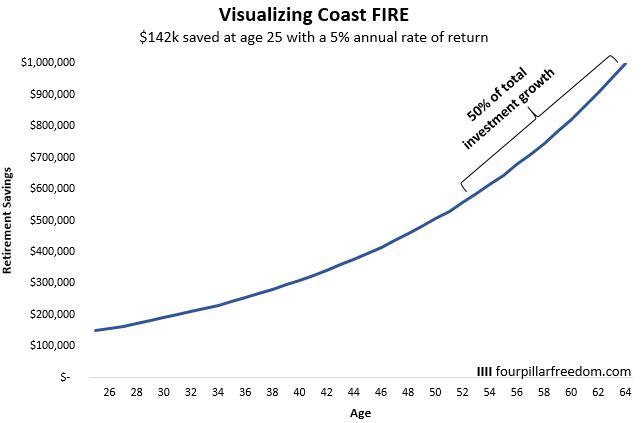 Thus, the earlier you start saving, the less you need to save to achieve Coast FIRE.

For example, in order to have a portfolio worth $1 million by age 65, here’s how much you would need to have invested by each age: 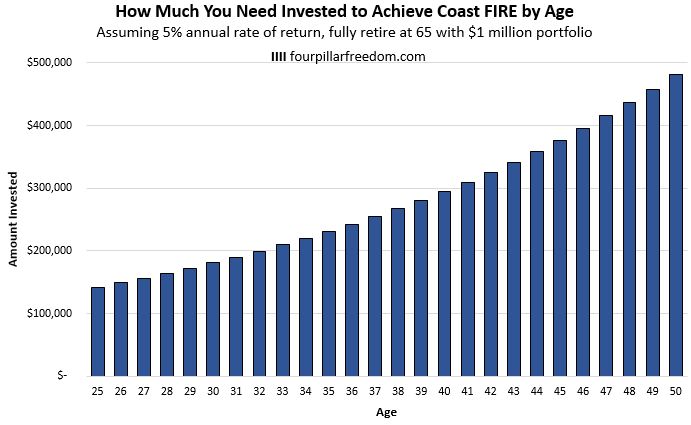 How to interpret this chart:

And so on, and so forth.

This chart shows that Coast FIRE is achievable at any age, but the sooner you start saving the less you actually need to save to make the numbers work.

How to Calculate Your Own Coast FIRE Number

In the previous examples, I made a few assumptions. Namely:

However, your numbers might vary. Perhaps you want more than $1 million, or you want to achieve F.I. sooner than age 65, or you want to see how different annual rates of return impact these calculations.

Fortunately, you can calculate your Coast FIRE number easily using the following formula:

For example, suppose I need $1.5 million to be financially independent, I assume a 5% annual rate of return after inflation, and I want to hit Coast FIRE by age 30 and fully retire by age 70, which gives my investments 40 years to compound.

I can punch the following formula straight into Google: 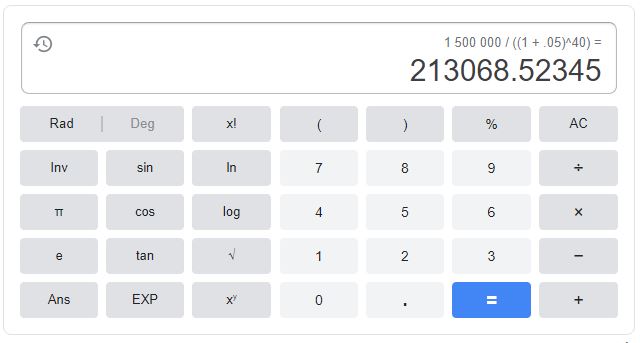 The Benefits of Coast FIRE

Traditional retirement says you need to work at a soul-sucking job for 40 years.

Early retirement says you need to work at a soul-sucking job for 10-20 years, depending on your savings rate.

Coast FIRE says you need to work at a soul-sucking job for as little as 4-8 years.

The benefit of Coast FIRE is that you can leave a shitty job as fast as possible and still be able to fully retire one day. And while you still have to earn income to cover your expenses on the road to financial independence, you can often do so by working at a less stressful job.

This allows most people to gain a better work-life balance quickly, rather than waiting a decade or two until they have enough to be completely financially independent.

If you don’t find the traditional retirement path appealing, you may want to consider early retirement.

And if you don’t find the early retirement path appealing, you may want to consider Coast FIRE.