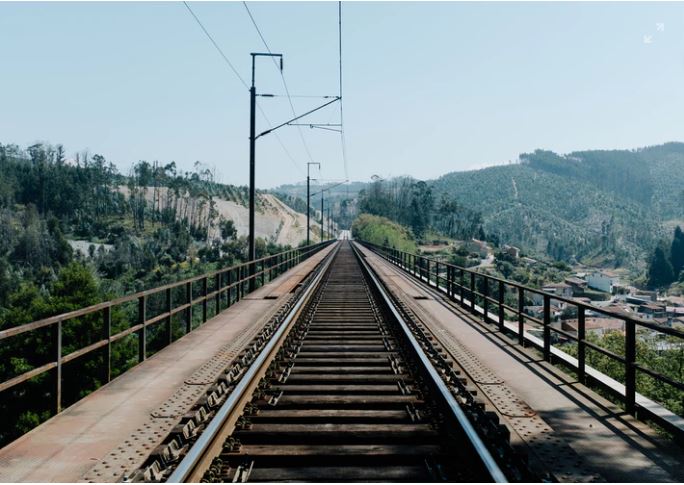 When I quit my day job as a data scientist almost two months ago, I gave up a yearly salary of $80k with a potential annual bonus of $8k to $12k. Let’s call my total compensation $90k per year.

I left this gig for three reasons:

I’ve written about those first two points quite a bit – I hated Corporate America and I wanted to pursue full-time entrepreneurship. However, I haven’t discussed that third point very much – the fact that I felt I could grow my income exponentially quicker through online business compared to a day job.

That’s what I’ll discuss in this post: why I traded a high-income, low-growth path as a data scientist for a (currently) low-income, high-growth path as an entrepreneur.

How Much Can You Make as a Data Scientist?

The amount you can make as a data scientist is dependent on a variety of factors. One factor that is particularly important is where you work.

For example, the median salary varies significantly from country to country, as can be seen from The  2016 O’Reilly Data Science Salary Survey, which surveyed just shy of 1,000 data scientists across the world: 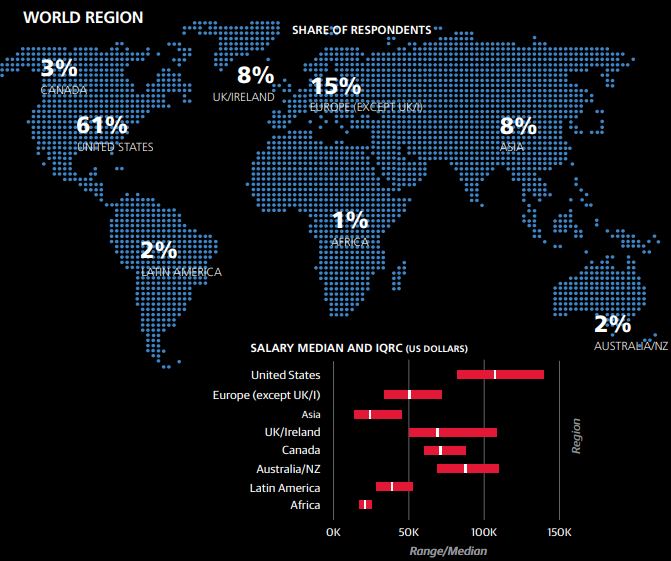 Even within the United States, salaries vary quite a bit depending on which region you work in: 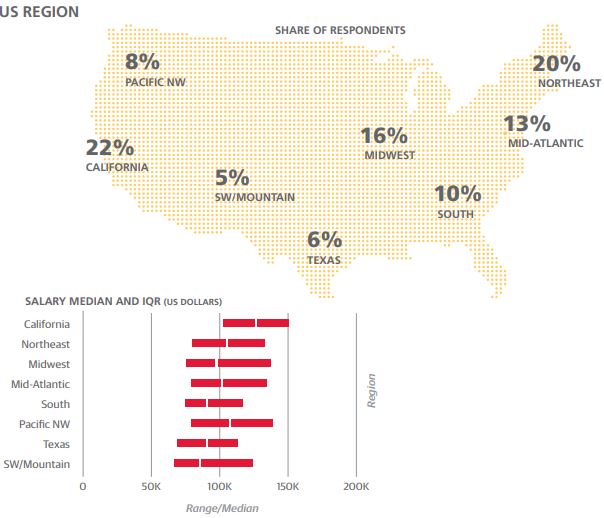 The specific industry that you work in has a noticeable impact on salary as well, which can be seen from the chart below: 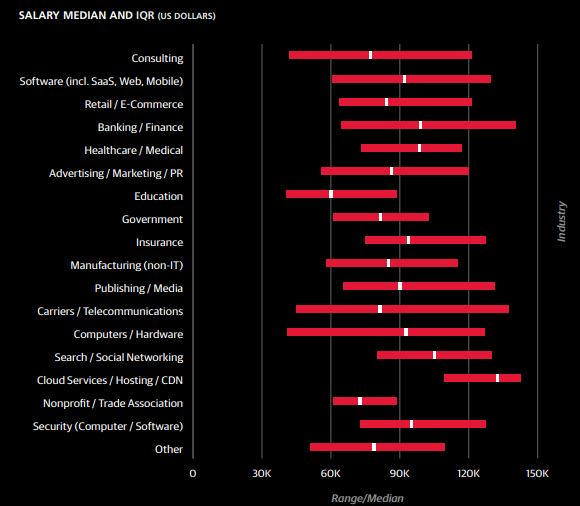 For example, data scientists who work in the cloud services and hosting industry earn considerably more than those in the nonprofit or education sectors.

For the sake of simplicity, I’ll ignore differences in salaries across industry and focus exclusively on data scientist salaries in my own state of Ohio.

According to the job site indeed, the average salary for a data scientist in Ohio is $106,178:

Within Ohio, the average salary fluctuates quite a bit from one city to the next:

Keep in mind that some of this data is based on fairly low sample sizes (e.g. 9 salaries were calculated to find the “average” data scientist salary in Cleveland, OH), but it still gives us a ballpark number of how much you can earn in different regions.

Salary is also highly dependent on experience. At the time when I decided to quit, I had about three years of experience, which explains why my total compensation of $90k was lower than the statewide average of $106k.

Nonetheless, I considered an annual income of $90k for my age and my location (the midwest) to be a high income. But it’s also important to consider income growth potential. As with any industry, more experience is associated with a higher income.

To quantify just how much experience is worth, we can take a look at The Data Science Salary Survey conducted by the industry leader O’Reilly, which found that each additional year of experience was associated with a $2,000 – $2,500 increase in annual income. This number fluctuates from one place to the next, but it serves as a nice baseline.

So, here’s what my potential income path could have looked like over the course of fifteen years as a data scientist based on a starting income of $90k and an annual increase of $2,000-$2,500: 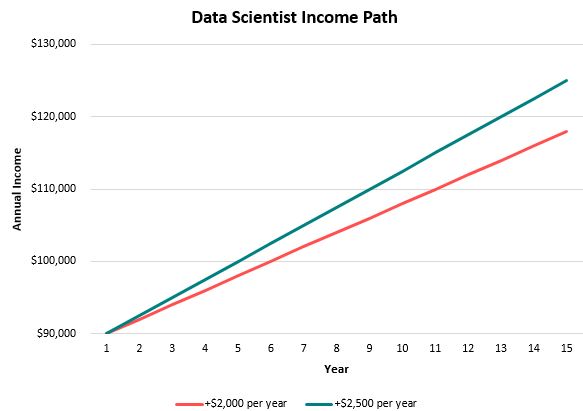 These numbers seem to line up with those shared in the O’Reilly survey. Specifically, respondents who had 13-16 years of experience earned a median salary of about $120k:

Of course, it’s highly unlikely that my annual income would have increased in such a linear fashion. Instead, it probably would have bounced higher if I job-hopped, similar to this path that Kitty from Bitches Get Riches shared in one post:

In general, though, my salary would have likely been around $120k fifteen years from now. I would consider this increase of $30k (from $90k to $120k) over the course of 15 years to be low growth.

So, the field of data science offered me a high-income, low-growth path. Let’s contrast this path with that of an entrepreneur.

How Much Can You Make as an Entrepreneur?

The amount of money you can make as an entrepreneur varies based on the type of work you do. In general, there are two types of ways to make money working for yourself:

For an individual who runs a service-based business (think yoga instructor, tutor, chef, etc.), there is an upper limit on how much money they can make. Since there’s only so much time in the day, they can only instruct, tutor, or cook, for so many people.

For someone who runs a product-based business, however, there is no upper limit on how much money they can make. This is because they only have to make a product once and can then sell it over and over again without any additional time commitment.

Personally I own and operate several different websites, which are monetized in the following ways:

The beauty of these income streams is that I only have to do the work once in order to reap the benefits over and over again. For example, if I can use SEO to get an article to rank on the front page of Google, I can earn recurring ad revenue on that article for years to come without any additional work. Or if I create a course one time, I can sell the same course over and over again to different people without additional work.

This inherently means that my income should continue to increase more and more over time, not because I am working more hours, but because I am creating a growing workforce of digital assets that earn money for me.

Over the past three years I have seen this phenomenon of an ever-increasing income play out in my sites: 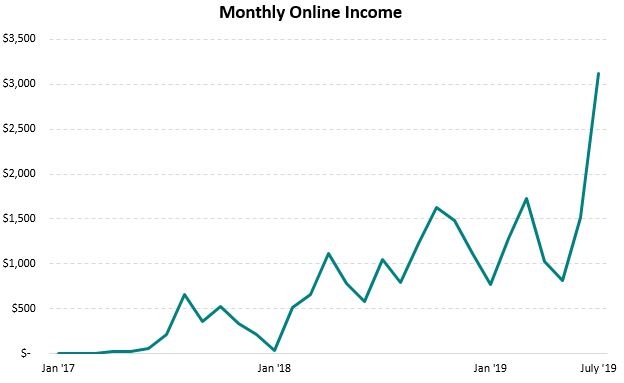 Note: I attribute the massive boost in July 2019 to the fact that I quit my day job and worked on my sites full-time during that month.

Although my monthly income has been lumpy from one month to the next, it has followed an exponential trend over time: 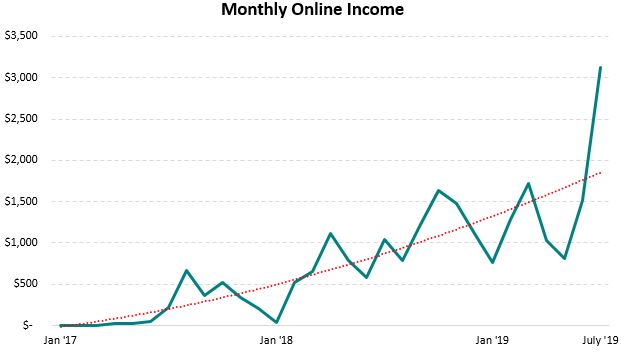 The equation of that trend line is as follows:

where “months” is the number of months since January 2017.

So, using this equation I can forecast how much my monthly income will be five years from now, which would be 92 months from January 2017:

This is equivalent to an annual income of about $141k, which is much higher than a five-year projected salary of $100k.

Although I don’t like to use a model like this to make income projections too far into the future, the simple fact is that the longer the time-horizon, the larger the difference is likely to be between my income from a day job and my income from entrepreneurship.

This is why I consider entrepreneurship to be a (currently) low income, high growth path, and one that I much prefer over a corporate job.

The other reason that I was so eager to quit my day job and pursue entrepreneurship was because I wanted freedom over my time as soon as possible. Although I have a relatively low income right now, I have complete freedom over my time. That’s hard to put a price on.

So, beyond the fact that I thought entrepreneurship offered higher income growth potential, it also offered a perk that can’t be quantified: freedom.

For those of you reading this who are currently working in the data science space or want to get into data science, I want to make it clear that having a day job as a data scientist is not a bad thing. In fact, it’s probably one of the most low-stress, high-income jobs available on the market.

The reason that I personally disliked my day job as a data scientist wasn’t because of the work itself (I enjoyed writing code, making visualizations, using stats/math to solve problems, etc.), but rather because of the environment that the work was wrapped in. Namely, the daily commute, the micro-managers, the office politics, the pointless meetings, the annoying performance reviews, the strict schedule, and the need to wear pants every day.

Ever since I was young, I’ve naturally been a bit of a “lone wolf” and have always preferred to work by myself on things I find interesting as opposed to working in a group on projects that rely on coordination between multiple people.  As my friend APL once put it, day jobs suck because they’re basically never-ending group projects.

However, not everyone hates group work as much as me or has an insatiable craving for complete freedom over their time. In fact, I know plenty of people who enjoy their day job and actually thrive in group settings.

If that’s you, don’t let this post deter you from pursuing data science if it’s a field you’re interested in. It’s a growing field with high compensation for those who are willing to develop the specific skill set required to excel in the field.