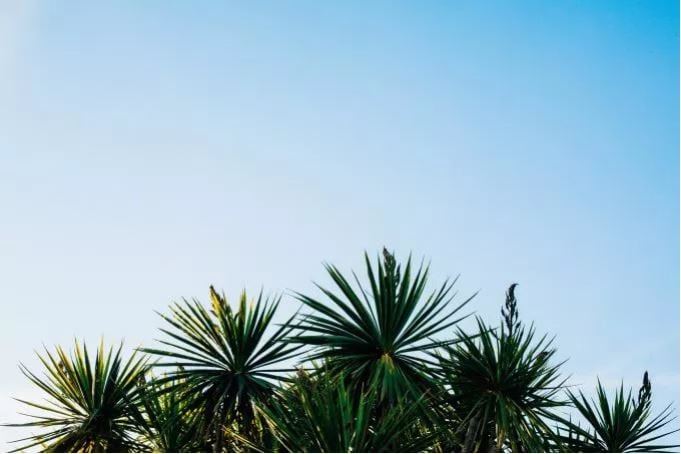 I am absolutely fascinated with tracking subscriber counts of up-and-coming rappers on YouTube.

Depending on the artist, it often takes about a year to go from 0 to 1,000 subscribers. This is a long, slow journey to gain new listeners and make their presence known online.

Then another year to go from 5,000 to 25,000. Their videos start getting recommended to listeners on the sidebar of YouTube.

And once the artist hits a certain subscriber threshold, often between 25,000 and 40,000, something remarkable happens: word-of-mouth marketing begins to take over. The artist no longer has to promote themselves as much because they have a decent-sized fan base that spreads their music via social media.

Pretty soon the artist is gaining hundreds of new followers daily and their rise to prominence becomes inevitable after a certain point.

What’s fascinating to me is that there are two factors that contribute to this subscriber growth:

2. The actual skills of the rapper

It helps that the rapper has a fan base to spread their music, but it’s also a fact that the rapper is simply becoming better over time as they make more songs. The quality of the music organically attracts new fans.

This combination of an increasing fan base along with an improving skill set propels the artist forward.

When you just start out, you may only have $1,000 to invest. A 7% annual return on this $1,000 is $70 per year. And in the early stages, that’s an incredible feeling – $70 just handed to you for making an investment! But in the grand scheme of things, it’s peanuts. It’s not enough for you to quit your day job.

But eventually you save your first $10,000 and a 7% return is now worth $700. Still peanuts, but slightly bigger peanuts. That’s almost two dollars a day being handed to you for doing nothing.

And at some point you’ll eventually have your hands on your first $100,000, which means a 7% return would be worth $7,000. The peanuts become noticeable at this point. 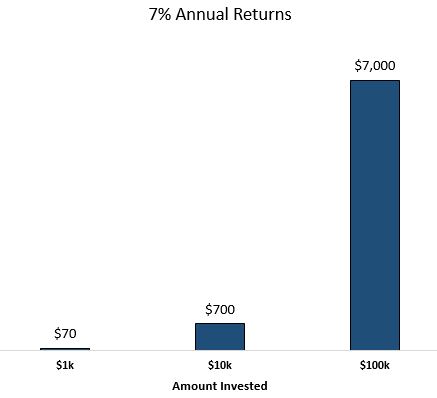 At the same time that your investment returns are becoming more powerful, it’s likely that your income-earning skills are also ramping up. You’re gaining experience, learning new skills, and landing new connections. Your salary increases. You find a side hustle you’re uniquely good at. Maybe you start a blog that begins earning hundreds or thousands each month.

And suddenly you have a combination of two forces that propel your net worth higher: increasing investment returns and an increasing income. Once you have these two forces at play, you become an unstoppable force financially. Wealth accumulation becomes inevitable. 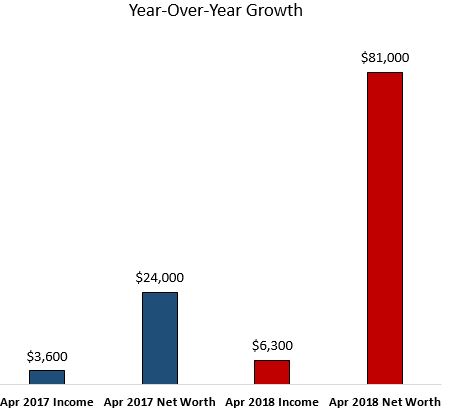 By increasing both my income and my investments, I have two powerful forces that are helping me increase my net worth each month at a rapid pace.

I can’t emphasize enough how important it is to get both of these forces working in your favor.

As time goes on, the amount of money you have invested will (hopefully) steadily increase. This will help compound interest come alive. Instead of earning a few bucks each month in capital appreciation and dividends, you’ll eventually be earning hundreds or even thousands from investments alone.

But it’s just as important, especially in the early stages, that you increase your income through acquiring new skills that command a higher salary, finding niche lucrative side hustles, and simply becoming the type of person who knows how to earn a high income.

This won’t happen overnight. Knowledge and skills takes time to build up. You’ll likely have to rack up a long list of failures before you can find the income streams that work best for you.

No matter where you are on your financial journey, combining investment returns with an increasing income has the potential to make you an unstoppable force.