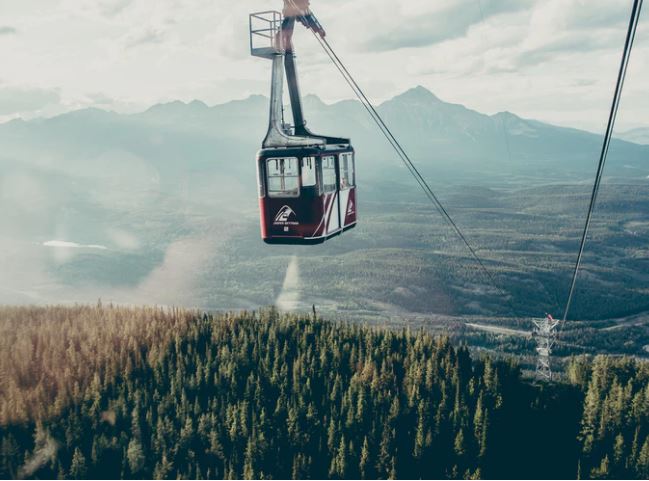 Suppose Ralph is a senior in college. He currently works as a shift manager at a restaurant on campus and earns about $20k per year after tax. Between his rent, meals, transportation, and all his other expenses, Ralph spends about $20k per year. So, he’s unable to save and invest any money but he earns enough to support his college lifestyle.

Now imagine Ralph graduates at the end of the year and lands a job with a starting salary of $40,000 after tax. He has doubled his income.

At this point, Ralph has an important decision to make: should he keep living like a college student and spend about $20k per year or should he upgrade his lifestyle and start spending more of his hard-earned income?

Let’s  run the numbers on a few different scenarios.

Suppose Ralph decides to keep living like a student in his first year out of college. So, in his first year he decides to spend $20k just like he did as a student. Let’s assume that he’s able to increase his income by 4% each year and he also increases his spending by 4% each year. Let’s also assume he invests all of his savings each year into a stock market index fund and earns 5% annual returns each year. We’ll also assume he starts with a net worth of $0. 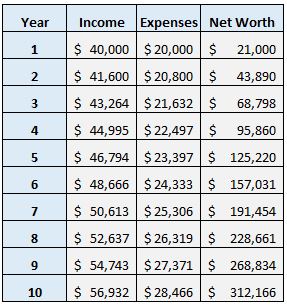 Notice something interesting here: since Ralph decides to save 50% of his income in year 1 and increases both his spending and income at the same rate each year, he is able to continue to save exactly 50% of his income each year. Effectively, he set the bar for how much he should save in his very first year out of college.

Now consider another scenario: Ralph decides to inflate his lifestyle a bit and start spending $30k in his first year out of college. Again, let’s assume that he increases his income by 4% each year, spending by 4% each year, earns 5% annual returns, and starts with a net worth of $0. 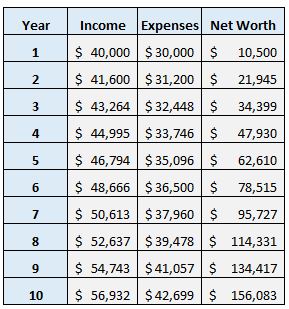 In 10 years, Ralph would be able to accumulate $156,083, which is less than half of the amount in the previous scenario.

Now consider one last scenario: Ralph decides to spend $36k in his first year out of college. Again, let’s assume that he increases his income by 4% each year, spending by 4% each year, earns 5% annual returns, and starts with a net worth of $0. 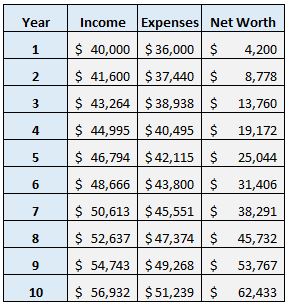 Here’s a look at the difference in Ralph’s net worth after 10 years in each of the three scenarios: 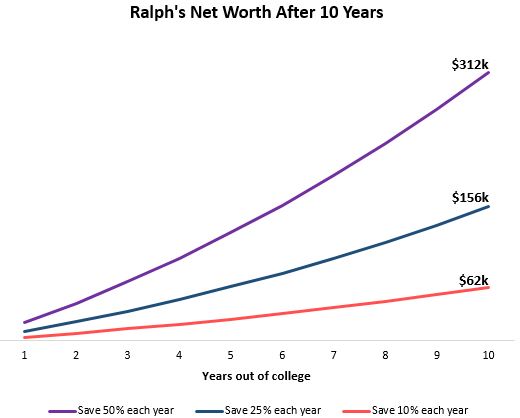 By deciding to live like a college student and spend just $20k per year in his first year out of college, compared to $36k, Ralph would be able to accumulate over five times as much money over the course of 10 years.

The Impact Over Longer Time Horizons

If we run the numbers over longer time horizons, the differences become even more mind-blowing.

For example, here’s how Ralph’s net worth would grow over the course of 20 years using the same three scenarios as before: 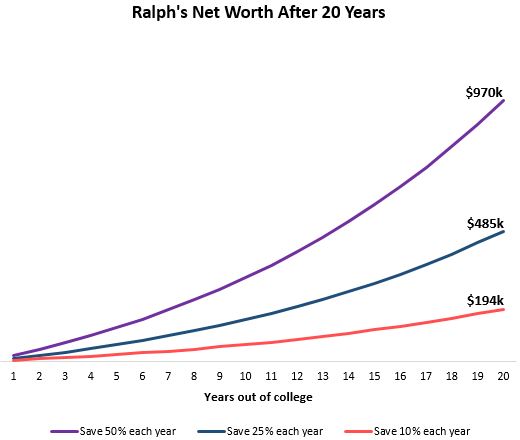 And here’s a look at the same three scenarios over a 30-year time horizon: 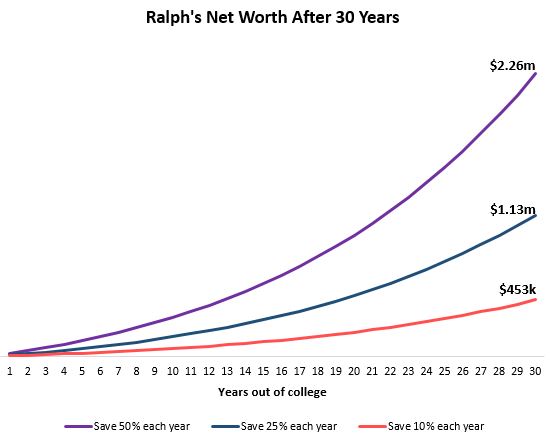 These differences are even more incredible!

Living Like a Student Has a Massive Impact on Wealth

There are two main reasons why living like a student in your early years has such a massive impact on your long-term wealth:

1. The money you save and invest in the early years is impacted most by compound interest over the long-term. Each dollar that you save and invest in your early years has the ability to compound for several decades. And while compound interest won’t make you rich in the short-term, it has the potential to generate incredible wealth over the course of several decades.

So, even if the actual amount you invest early on doesn’t seem like much, the amount of time that you’re giving that money to grow is what makes those early dollars multiply several times over the years. This is why saving and investing 50% of his income each year would allow Ralph to accumulate $2.26 million over the course of 30 years compared to just $453k if he only saved and invested 10% of his income.

So, if you’re in the early years of your financial journey, I recommend living like a college student. The financial benefits over the course of the years are tremendous.

Technical notes: I assumed Ralph started with no debt in his first year out of college. If I instead assumed he started with a negative net worth, the ending net worth numbers for the three scenarios would have changed but the actual differences in his net worth numbers across the three scenarios would have been the same. I also made a conservative assumption that he earned 5% annual investment returns, although from a previous analysis we know that the long-term inflation-adjusted annual returns for a stock index fund like the S&P 500 are closer to 6 – 7%.